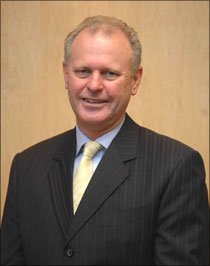 After over 27 years at Ford Motor Company, Michael Boneham, president and managing director of Ford India, is all set to hang up his boots this December.

"Boneham has elected to retire effective December 31, 2012 after a successful career spanning over 27 years with Ford Motor Company", the company said in a statement.

He will be succeeded by Joginder Singh, who now heads the Business Services Centre of Ford Motor Company.

"Michael's contribution to our business in Asia has been significant, specifically his leadership of the India market.

"Building the foundation blocks of Ford's transition to a mass player, leading the launch of game-changing Ford Figo and his role in securing the $1 billion investment for our second new integrated manufacturing facility at Sanand (Gujarat)," Ford Asia Pacific and Africa, President Joe Hinrichs said.

Boneham began his career in Ford at its Australian subsidiary in the Human Resource Department. Later he shifted works in Europe, North America and APA in manufacturing and general management roles,

In India, he commenced his career as Executive Director, Manufacturing at Ford's Maraimalai Nagar plant near Chennai.

Joginder Singh who joined Ford Europe, in 1980, will take over Boneham's responsibilities of managing and growing the integrated manufacturing operation of Ford India.

"Singh in his new role will also lead the charge of product programmes of bringing in eight new products by mid-decade and oversee the successful implementation of Ford's expansion plans in India, through its operations in Chennai and its second upcoming facility in Gujarat," the company said.

On appointment of Singh, Hinrichs said, "Joginder's proven leadership will be critical to driving the successful and ongoing expansion of our India operation.

His wealth of experience and understanding of the Ford brand globally and local market expertise will be invaluable in helping Ford to continue its growth momentum".

David Dubensky has been appointed as Executive Director, Global Business Services who would take over from Singh, effective November 1, 2012, the statement added.Image: Michael Boneham | Photograph: Rediff Archives
© Copyright 2021 PTI. All rights reserved. Republication or redistribution of PTI content, including by framing or similar means, is expressly prohibited without the prior written consent.