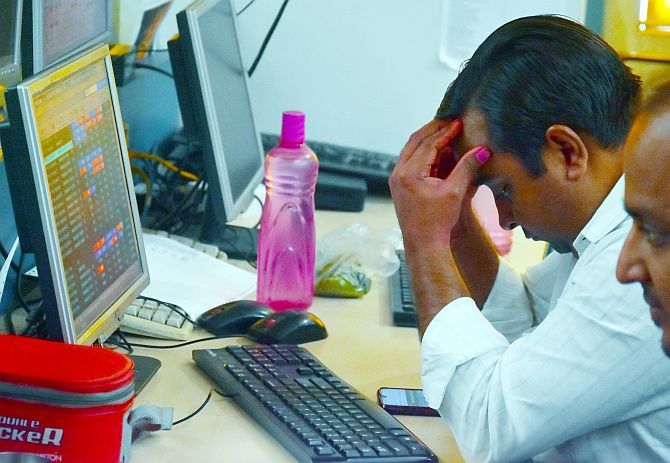 Benchmark stock indices Sensex and Nifty tumbled nearly 1 per cent on Wednesday due to profit booking in banking, financial and IT stocks after a recent rally.

Bajaj Finance was the biggest loser among Sensex stocks, dropping by 7.24 per cent.

"Market continued to be gripped by high volatility following a heavy selloff in the global markets led by elevated energy crisis and weak Chinese economic outlook underpinned by prospects of US rate hikes," Vinod Nair, head of research at Geojit Financial Services said.

"Investors are weighing the possibility of a global slowdown due to monetary tightening by central banks, lockdown in China and Russia -Ukraine war.

"This has resulted in an outflow of funds from equity markets to safe havens," Nair added.

In the broader market, the BSE midcap gauge declined 0.88 per cent and smallcap index dipped 0.61 per cent.

"Global headwinds like the Russia-Ukraine crisis, China's lockdown, inflation worries and now earnings are causing erratic swings in markets across the globe including India," Mishra said.

Meanwhile, LIC set the price band at Rs 902-949 per share for its Rs 21,000 crore initial public offering (IPO), which will open for subscription on May 4.

Shivam Bajaj, founder & CEO at Avener Capital said the revision in the LIC IPO valuation amidst the volatile environment demonstrates the keenness of the government to deliver on the IPO.

Asian markets were mixed, with Tokyo and Seoul settling over 1 per cent lower, while Hong Kong and Shanghai ended higher.

Markets in Europe were trading in the green in the afternoon session.

Stocks in the US had ended significantly lower on Tuesday.

Meanwhile, international oil benchmark Brent crude gained 0.89 per cent to $105.81 per barrel. Gas prices in Europe soared by 24 per cent after Russia said it would cut off supplies to Poland and Bulgaria.