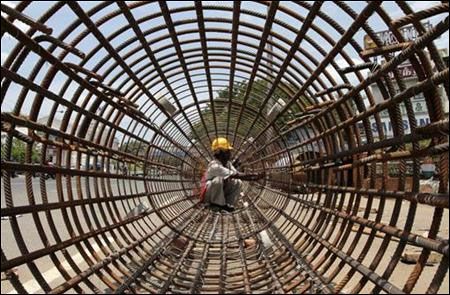 Larsen and Toubro on Monday reported an over two-fold rise in consolidated net profit at Rs 967 crore (Rs 9.67 billion) for the April-June quarter, buoyed by a Rs 1,382-crore (Rs 13.82 billion) gain on disinvestments.

The engineering and construction major had reported Rs 458.59 crore (Rs 4.58 billion) net profit in the first quarter of the last fiscal, it said in a statement.

"During the quarter ended June 30, 2014, the Group divested its stake in a joint venture under its development projects portfolio and in subsidiaries of its realty business.

The other operational income, forming part of the revenue from operations, for the quarter ended June 30, 2014 includes a gain of Rs 1,38,176 pursuant to these divestitures," it said.

"Major orders during the quarter were secured by infrastructure, hydrocarbon and heavy engineering segments," it said. Consolidated order book of the group stood at Rs 1,95,392 crore (Rs 1,953.93 billion) as on June 30. International orders constitute 26 per cent of the total kitty. "Notwithstanding the improved sentiment, the domestic business environment and investment cycle continued to remain subdued during the quarter ended June 30," it said on the business outlook.

However, it added that the domestic market holds large potential awaiting impetus through policy measures and conducive investment environment. Shares of the company today closed down by 0.70 per cent at Rs 1,644.75 apiece at the BSE.