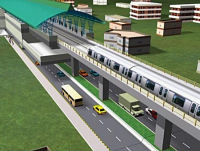 L&T Metro Rail Hyderabad has achieved the financial closure for the Rs. 16,375 crore (Rs. 163.75 billion) Hyderabad Metro Rail project, making it the largest ever fund tie up in a public private partnership project in India.

YM Deosthalee, Chairman, L&TMRHL, told a news conference in Hyderabad on Tuesday that a consortium of 10 banks, led by the State Bank of India, has sanctioned the entire debt requirement of Rs. 11.480 crore (Rs. 114.8 billion) for the project.

"This is a record that largest ever fund tie up for a PPP project has been achieved with in the stipulated time of six months", he said.

L&T had bagged the prestigious project in September last year through competitive bidding under the design, build, finance, operate and transfer basis.

Interestingly this is the second time that the government of Andhra Pradesh had to call for the bids as Maytas Infrastructure, which had bagged the project in the first round of bidding, backed out after its parent company Satyam Computers collapsed under the impact of a massive scam.

VB Gadgil, Managing Director, L&TMRHL, said that the project, involving the construction of 71.16 km of elevated metro rail in three corridors of Hyderabad along with stations and other facilities, will be completed in five years from the day of ground breaking.

"Considerable engineering works including soil testing and topographical surveys have been completed in most locations", he said.

"The alignment of the corridors of the project was being finalized in a manner that the heritage structures of the city are least affected", he added.

While AECOM was responsible for the conceptual engineering, Louis Berge Consulting, a major US based company has been appointed by the government of Andhra Pradesh as an independent engineer for the project to oversee design and execution of the project in accordance with the technical specifications and safety standards laid down in the concession agreement.

K Venkatesh, Vice-President, L&T, said that the project will have two major stream of revenue in the passengers and the real estate to be developed along the Metro rail line including the stations.

"According the preliminary estimates 14 lakh passengers will ride the Metro per day", he said.

Under the concession agreement, under which L&T will be able to operate the Metro Rail for 35 years, extended by another 25 years, company will have a right to develop 18.5 million square feet of real estate.

The project will be integrated with the existing suburban railway network called MMTS, and the bus services to ensure seamless and comfortable travel for the passengers.

NVS Reddy, Managing Director, Hyderabad Metro Rail, said that the Metro project will mark a big leap forward for Hyderabad towards the position of a global city.

Pointing out that the population in and around the city has already reached 90 lakhs, Reddy said that Metro Rail along with the outer ring road project will be able to meet the future needs of the city till the population reaches 3 crore mark.

Reddy said that the project will trigger a mammoth economic activity in and around the city and provide employment to 50,000 people, including 1,200 to 1,500 technical professionals, during the construction period.
Mohammed Siddique in Hyderabad
Related News: Metro Rail, Reddy, State Bank of India, TMRHL, AECOM
SHARE THIS STORY
Print this article