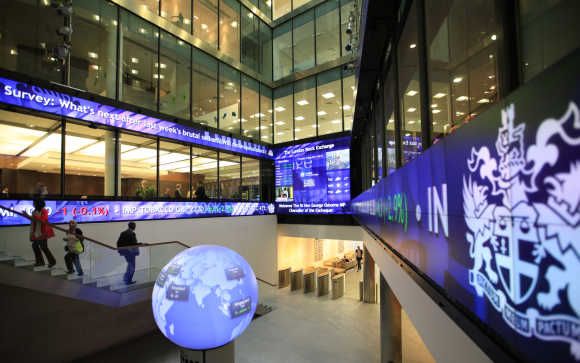 Image: The exchanges sought to sell the deal to investors with the lure of annual cost savings of 450 million euros. Photograph: Reuters

But the deal, which marks a third attempt to link the Frankfurt and London exchanges, may prompt a takeover war after New York Stock Exchange owner Intercontinental Exchange said it may bid for the British group.

Nearly 16 years after Deutsche Boerse first tried to take over LSE, the exchanges said last month they were discussing an all-share merger, which they confirmed on Wednesday would give Deutsche Boerse shareholders 54.4 percent and LSE investors 45.6 percent of a new company.

This offers a unique opportunity for Frankfurt which has always played second fiddle to London as a global financial centre, something recognised by the German government which said it would welcome the deal if it strengthened Frankfurt.

The exchanges sought to sell the deal to investors with the lure of annual cost savings of 450 million euros ($500 million).

They also promised users - the banks and fund managers who pay fees to trade and companies who pay to be listed - "substantial benefits", but gave no figures.

And in a clear effort to win over Europe's politicians to the benefits of a dominant pan-European exchange, Deutsche Boerse Chief Executive Carsten Kengeter said it would enable Europe to enhance its capital markets.

This chimes with European Union plans for a "Capital Markets Union" to compete better with the United States and Asia.

Kengeter said Germany's Bundesbank and Frankfurt-based European Central Bank will "really appreciate" the boost to Frankfurt as a financial centre.

"With this transaction Deutsche Boerse is halting its decline in market share that has been on the cards for a number of years," Kengeter said.

Deutsche Boerse has been under constant pressure because Europe was the "natural space" for expansion for North American and Asian rivals, with the deal providing the critical mass needed for Germany and Europe overall to fight back, he added.

Despite these incentives, the deal faces questions over Britain's EU referendum in June and whether regulators will approve a huge presence in derivatives clearing.

"The major test lies in the regulatory hurdle which, combined with added scrutiny in the context of Brexit, places the onus on the two companies to make a compelling case for the deal over the coming months," said Peter Gray, a lawyer at Cavendish Corporate Finance.

Kengeter said the time was right for a merger which will combine the LSE's share-trading operation with the derivatives trading of Deutsche Boerse's Eurex, adding that he expects the deal to close by the end of 2016 or in early 2017.

No decision has been taken on the date of a shareholder meeting to vote on the merger and Kengeter shrugged off concerns over the impact of Britain, Europe's biggest financial centre, voting to leave the EU.

"We will be having a successful transaction irrespective of the Brexit outcome," he said.

In further efforts to keep all parties happy, the exchanges confirmed LSE Chairman Donald Brydon would be chairman and Kengeter CEO and the board would have equal representation of LSE and Deutsche Boerse directors.

One potentially sensitive question yet to be ironed out is the name for the new firm, which will be domiciled in Britain, with a primary listing in the blue-chip FTSE 100.

It will also have a home on the Frankfurt Stock Exchange and a corporate headquarters in both cities. LSE Chief Executive Xavier Rolet, who will retire if the deal goes ahead, sought to ease concerns that large swathes of IT operations would shift from London to Frankfurt, saying there would be a "balanced" distribution between the two.

Industry analysts warned of challenges from the EU's competition regulator over a huge presence in derivatives clearing, which was an issue when a previous attempt by Deutsche Boerse to merge with NYSE Euronext was scuppered by Brussels.

Kengeter said he was "confident" of clearing a review by regulators and talks has already begun with them, adding that clearing should be viewed in a global not European context.

LSE Group -- created in 2007 when London Stock Exchange merged with Milan stock exchange Borsa Italiana -- said its shareholders would receive a dividend of 25.2 pence per LSEGshare for the six months to December 31.