ONGC was the top loser in the Sensex pack, shedding around 5 per cent, followed by SBI, Axis Bank, ICICI Bank, Bajaj Auto and Maruti. 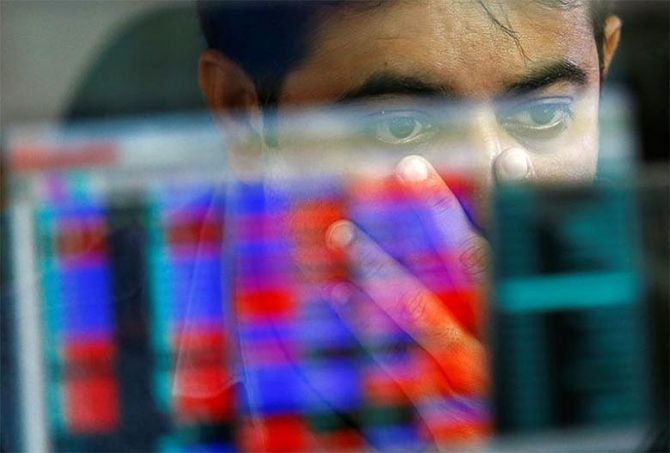 The Sensex tumbled 435 points while the Nifty slumped below the 15,000-mark on Friday as markets buckled under selling pressure for the fourth session on the trot amid a lacklustre trend in global markets.

A day after topping the Sensex gainer's chart, ONGC emerged as the biggest laggard in Friday's session, tumbling 5.06 per cent.

It was followed by SBI, Axis Bank, ICICI Bank, Bajaj Auto, Maruti and M&M, which shed up to 3.77 per cent.

On the other hand, IndusInd Bank, HUL, Dr Reddy's, NTPC, Reliance Industries and Bajaj Finserv were among the gainers, climbing up to 1.97 per cent.

"The Nifty-50 and BSE Sensex declined by 1.2 per cent this week as market mood became cautious on rising global and local bond yields.

“The broader markets that is NSE Mid Cap 100 Index and BSE Small Cap Index are both in the green this week.

“The US 10 Year Bond yields have risen from below 1 per cent to 1.29 per cent, building in economic impact of the $1.9 trillion stimulus package.

"In India, too, the 10 year bond yields have moved up from recent low of 5.76 per cent to 6.13 per cent, which could mainly be linked to the higher fiscal deficit estimates... Almost 37 stocks from Nifty-50 lost ground this week with pharma and select consumers having lost the most," said Rusmik Oza, executive vice president, head of Fundamental Research at Kotak Securities.

Sectorally, BSE auto, metal, bankex, healthcare and finance indices lost as much as 2.59 per cent, while energy index was the sole gainer. Broader BSE mid-cap and small-cap indices fell up to 1.67 per cent.

Global markets were mixed amid weak macroeconomic data from the US and Europe, casting a cloud over expectations of a swift economic recovery.

Elsewhere in Asia, markets in Tokyo ended on a negative note, while Shanghai, Hong Kong and Seoul closed with gains.