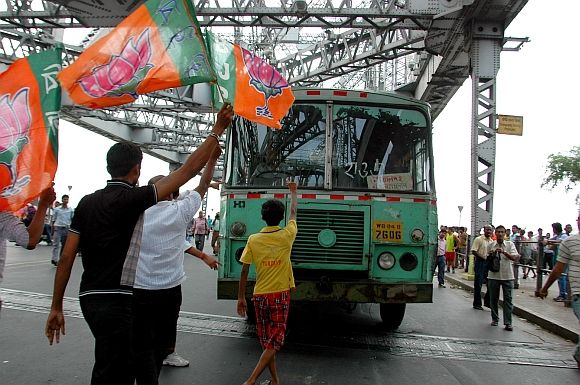 BMS, BKS and SJM are trying to forge common cause with outfits on the other side of the ideological divide over the government’s policies they are not in agreement with.

Rashtriya Swayamsevak Sangh-affiliated organisations are increasingly lending their voice to those at the other end of the ideological divide on certain issues where there’s a meeting of minds. These include opposition to the government’s move to sell the land of closed public sector undertakings and allow genetically modified seeds.

More recently, the SJM has taken a strident position against the government move to allow mustard hybrid seeds, while the BMS is all set to protest any move to close down PSUs, or sell the land of closed PSUs to private realtors.

BMS is in particular opposed to the government move to sell land belonging to sick textile factories in Mumbai. According to sources, BMS has conveyed its decision to oppose any sale of this land to private builders. The Centre has set the stage for the closure of 17 sick PSUs, of which four are already under liquidation.

On the GM mustard issue, the SJM submitted a blank response to the government’s Genetic Engineering Appraisal Committee. It was done to stress its opposition to the Centre’s attempts to clear GM mustard.

Notably, the SJM joined hands with activists such as Vandana Shiva, lawyer Prashant Bhushan, agriculture expert Devender Sharma and others at a recent round table meeting that unanimously resolved to oppose GM mustard. The meeting was also attended by scientist and noted GM critic Gilles Eric Séralini.

In 2012, a team from the University of Caen (France) led by Séralini concluded that biotech maize and herbicide can be severely detrimental to human consumption. Last month, a technical sub-committee under the ministry of environment, forest and climate change declared the Dhara Mustard Hybrid-11 (DMH-11) seed and the technology behind it to be safe for human consumption and the environment. The government regulator claimed it had consulted plant biologists, ecologists and environmentalists.

But, activists cast doubts on the data from the ministry. They said the results of tests and field trials of the crop were lower than those conducted for BT brinjal.

GM mustard is the second transgenic food to come up for regulatory approval after BT brinjal, which was cleared by GEAC under the previous United Progressive Alliance government. The ministry had subsequently put a moratorium on its commercialisation amid widespread protests against GM food crops.

The Alliance for Sustainable and Holistic Agriculture -- a collective of organisations opposed to GM foods -- said only Rajasthan, Punjab and Delhi allowed the field trial of the seed, as opposed to BT brinjal, when most states had given permission. It said several of the tests were not conducted for the requisite number of times or weren’t carried out at all. For example, tests on farm animals were not done.

Subsequently, the GEAC invited public comments on the findings till October 5. Environmentalists and activists have demanded that the government make public a dossier on bio-safety details.

Dhara Mustard Hybrid has been developed by a team of scientists at DelhiUniversity, led by former vice-chancellor Deepak Pental under a government-funded project. Pental defended the research saying all requisite testing was done.

“Major international research on GM crops has not had animal testing,” he told Business Standard.

Officials said GM mustard was unlikely to be cleared for field trials in the coming rabi season, but there was a strong section within the government pushing for its approval.

A senior central minister is a chief proponent for pushing GM mustard, which he believes has intrinsic benefits. Officials said Prime Minister Modi during his stint as Gujarat Chief Minister had approved the field trials of GM cotton and that Gujarat was among the first states to adopt GM cotton in a big way along with Maharashtra.

However, SJM, BMS and others affiliated to the RSS have their own support base to protect. The BMS, which stood with the government on the issue of trade union strikes, has its own concerns about the closure of PSUs.