The Karnataka government has decided to tighten the reins of the mining lobby in the state under the leadership of Chief Minister BS Yeddyurappa. 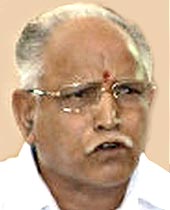 On Tuesday, the Karnataka Assembly unanimously agreed that it would lead an all party delegation to the Prime Minister seeking a change in the mining policy so that existing owners are barred from exporting ore.

The chief minister will lead a delegation seeking an amendment to the mining policy in the state. The illegal iron ore in Karnataka in the past five years is estimated to be to the tune of Rs 60,000 crore (Rs 600 billion).

Yeddyurappa said the state already has a new mining policy in place, according to which no new mining licenses shall be granted in Karnataka until the applicant agrees to add value to the ore that he is mining. By implementing the policy the applicant would have to circulate the ore within the state or set up a steel plant of his own. Earlier, this clause was granted to Arcelor Mittal too for mining lease.

However, the big clause is relating to the existing mining lease owners. The new policy does not bar them from exporting ore.

Regarding the export of ore by existing owners, the state cannot bring in a policy, said Yeddyurappa.

Government sources say that they have tried to work around this policy but only the Centre is capable of making such an amendment.

The move by Yeddyurappa seeking a change in the mining policy appears to be a direct hit at the Reddy brothers (Janardhan and Karunakara) who have a huge stake in the mining business in Karnataka.

Bharatiya Janata Party insiders, however, negate this and say that it is done largely in the interest of the state.

The Reddy brothers too are not reacting to this move and their camp said that they have no plans of toppling the government on this issue.

They also said they would set up their own plant in Bellary now to ensure that they have mining leases intact.

The Reddy brothers had initially planned on putting up a steel plant in Cuddappah, but with this change expected round the corner they decided to set up the plant at Bellary under the name 'Brahmini'.

On one hand the government plans to meet the prime minister and on the other it plans to file a petition before the Karnataka high court detailing the losses it has incurred due to illegal mining.

The draft objection states that between November 2009 till date, 35,31,918 metric tonnes of iron ore was illegally stored and exported from Karwar and Belekeri ports.

The government also admits that 57,17,370 metric tonnes of iron ore was exported from Karwar and Belekeri ports over the last five months, while the total number of permits issued by the department of mines and geology was only 21,85,452.

The Lokayukta report is another interesting aspect to look into. It states that 35 lakh (3.5 million) tonnes of iron ore has been exported from the state illegally.

Another shocking fact is that between Bellary from where the ore is exported to Karwar and Bilekere ports there are seven checkposts of the Commercial Taxes Department.

The report further states that till date not a single lorry carrying illegal ore has been stopped and not a single officer at any of the posts been suspended for dereliction of duty, leave alone being reprimanded.

While discussing these issues on the floor of the House, the government says it is very serious about protecting the natural wealth of the state.

The income it is generating from legal mining activity is laughable as it earns just around Rs 27 per tonne.

The government said that it would like to adopt the China model where ore is only imported and never exported in a bid to save their natural resources.

Moreover, this new policy will lead to industrialisation and also generate employment in the state due to the new clause that has been added in.

While Karnataka has decided to take the matter ahead the onus now lies on the Union government.

Karnataka says that it would press the Centre to implement a national mining policy which bans export of ore. The state also wants to ensure that this law applies to existing mine owners, too, who currently do not fall under the purview of the latest clause added in the Karnataka mining policy.

However, the Union government will have to take into consideration not only Karnataka's point of view but also have to consider the various other mining lobbies that exist in Chhattisgarh, Madhya Pradesh and Bihar before coming to a decision.