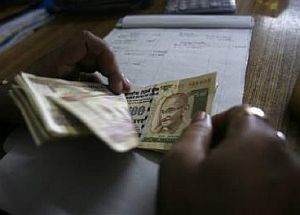 Banks have achieved the target set by the government to open 10 crore accounts under the Pradhan Mantri Jan Dhan Yojana (PMJDY) a month before the January 26 deadline.

As of December 26, the number of accounts opened under the scheme stood at 10.08 crore.

Banks have issued 7.28 crore RuPay Cards as on December 22, according to an official statement.

During a meeting chaired by Anurag Jain, Joint Secretary (FI) and Mission Director of PMJDY, banks committed to cover the gap in issuance of RuPay cards and accounts opened, including of Regional Rural Banks by January 15, 2015.

Banks were also asked to complete issuance of passbook to all account holders, the statement said, adding the issue of settling life insurance claim was discussed at length and the focus was on speedy disposal.

"Banks and LIC were asked to make claim forms readily available on their website.

LIC was asked to settle the claim within 15 days from the date of receipt of claim, if otherwise in order," it said.

The settlement process should not exceed 30 days in any case, it said.

As per the status, 99.73 per cent survey work has been completed and 95.30 per cent household surveyed has been covered.

The meeting was attended by executive directors of public and private sector banks, representatives of IBA, NPCI and UIDAI among others, and it was agreed that all banks would take up the task in a planned sweep mode and cover all the households by the end of December.

Thereafter, feedback from the public on the scheme will be sought and opening accounts of left-out household, if any, will be followed.

Banks were asked to complete deployment of bank Mitras latest by January 15 and display details of the same on their own website as well as on State Level Bankers' Committee.

This was to ensure that all Bank Mitra devices are online inter-operable through RuPay cards, it said. "Issue of remuneration to bank Mitras was discussed.

Only 21.50 per cent of bank Mitras are getting remuneration of more than Rs 5,000," it said. In order to ensure sustainability of bank Mitras, banks were asked to ensure minimum earnings of Rs 5,000 per month to bank Mitras by crediting the same directly in his or her account, the statement said.

Banks while agreeing to the principle informed that it would take some time as issues related to contractual management will have to be suitably addressed, it said.