News
Business
Movies
Sports
Cricket
Get Ahead
Money Tips
Shopping
Sign in  |  Create a Rediffmail account
Rediff.com  » Business » It was all over in a minute, says sacked Tata group strategist

It was all over in a minute, says sacked Tata group strategist 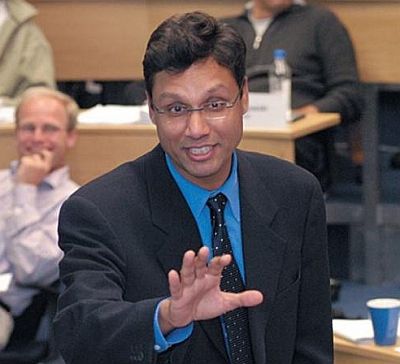 Former Tata group strategist and member of the now disbanded Group Executive Council, Nirmalya Kumar has said he was fired from his position for "working intensely and extensively" with ousted Tata Sons Chairman Cyrus Mistry.

Kumar, who also quit as director of Tata Chemicals last week, wrote in a blog titled "I Just Got Fired" that the decision of the group to fire him was conveyed to him on the same evening Mistry was sacked by "a colleague with whom I had worked very closely and got along famously..." and that it was "all over in a minute".

Hitting out at the Tatas for his "unceremonious and un-Tata like end", Kumar wrote: "It was not as if I was fired for non-performance (my last evaluation was excellent). I always do my best – it’s the least I expect from myself and the most anyone can expect from me. I was fired for just being there at my position -- working intensely and extensively with Cyrus."

Recalling how he was informed about the sacking of Mistry on October 24 while he was on a panel in front of over 100 young students and managers who were participating in a competition that Tata sponsors annually called TBLA, Kumar said no explanation was provided for his ouster.

"I get a call from a colleague with whom I had worked very closely and got along famously as we were often on the same side of arguments. He informs me: "it is my unpleasant duty to say your services are no longer required". No explanation. I query does this mean I do not need to show up tomorrow morning? Receive an affirmative reply. That’s it. It’s all over in a minute," he wrote.

When contacted, a Tata Sons spokesperson said no additional information could be added to an earlier statement issued by the company stating that Nirmalya Kumar, N S Rajan and Madhu Kannan have decided to explore options outside Tata Sons and have left the services of the company.

Insisting that he has nothing negative to say about the Tata group and expressing his admiration for the 6.7 lakh "Tata people", Kumar said: "They deserve a great Chairman."

Taking a dig at the CEOs and top executives of the group with whom he had worked closely for three years, Kumar said they were silent on the news of his sacking, while the middle level people were "sincerely sad to see me go" and "the people at the "bottom" of the pyramid treated me with the same respect and affection as always".

"The reaction at the top of the pyramid was interesting. With three exceptions, the many CEOs and top executives I worked with closely for three years went silent...The lesson for my team was clear. I told them these people have made it to the top. They know how the system works.

"When in future anyone mentions me, please don’t say anything positive. Throw me under the bus to gain credibility in the new regime. It’s my parting advice," Kumar wrote.