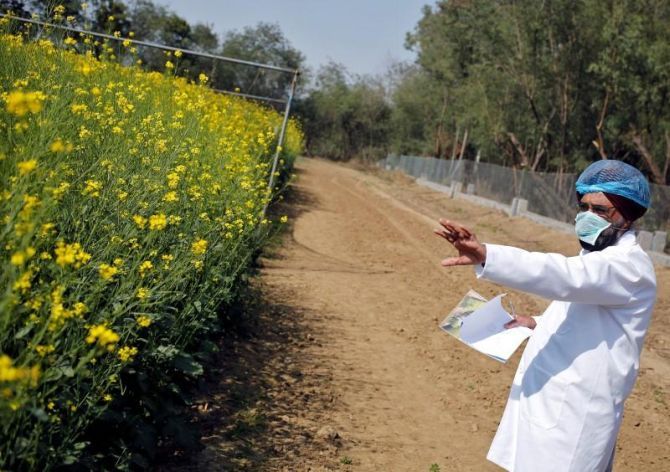 The Genetic Engineering Appraisal Committee (GEAC) under the environment ministry had at its latest meeting in March called for more ‘field demonstrations’ of genetically modified (GM) mustard.

To be done over a five-acre area in two or three different locations, for more data on honey bees and other pollinators, and on soil microbial diversity.

The applicants have also been directed to submit a detailed protocol on the demonstrations.

Those opposed to GM foods have objected, saying any data from improper testing would be ‘inadequate’ and ‘objectionable’.

GEAC had several representations in favour and against GM mustard.

At its meeting in March, it directed the applicants for GM mustard, in this case the Centre for Genetic Manipulation of Crop Plants under the University of Delhi, for more ‘field demonstrations’. The meeting’s minutes were recently made public.

“What is “field demonstration” in regulatory parlance? Where is it present in the guidelines? Why is GEAC yet again asking the applicant to submit a detailed protocol for consideration and approval? Doesn’t GEAC have the expertise and guidelines for these tests? Will the tests be conducted with herbicide usage, as is going to the reality” questioned Kavitha Kuruganti, co-convenor of the Coalition for a GM-Free India.

Adding: “You are not addressing critical issues being raised. Just asking the applicant to undertake a field demonstration for data generation is inadequate and objectionable.”

Last year around the same time, the Committee had approved commercial release of GM mustard.

It was put on hold pending formal clearance from the minister, who wanted further tests to settle the issue.

An official panel on the official aim to double farmers’ income by 2022 had, in a recently released report, said genetic engineering was a ‘powerful’ tool.

However, for now, it should be adopted only for non-food crops. For food crops, questions on its safety should be addressed and settled at the earliest, it had recommended.