Investors must be prepared to believe that things will get better eventually, no matter how bad the current situation may look. If you don't possess this optimism, you will not possess the courage to invest and if you don't invest, you don't give yourself any chance to get wealthy, says Devangshu Datta.

Sitting amidst the biggest public protests India has seen in decades, with economic indicators suggesting a further downturn, it is hard to be optimistic.

But optimism is one key quality that every investor must possess.

Investors shouldn't ignore reality and build castles in the sky.

But they must be prepared to believe that things will get better eventually, no matter how bad the current situation may look.

If you don't possess this optimism, you will not possess the courage to invest and if you don't invest, you don't give yourself any chance to get wealthy.

So let's see what you can be optimistic about.

It's not the current economic situation.

Available indicators suggests things got worse in the past three or four months.

Power consumption declined for instance. Automobile sales recovered slightly in October during the festive season, and fell again in November.

In addition, the protests in December, along with the attendant net shutdowns, will have led to even more contraction in business activity.

The macro-economic data is likely to be poor and so are third-quarter results.

Given GST collections that are much lower than estimated, plus the corporate tax cut, the fiscal deficit is likely to be well above targeted levels.

All this makes India less attractive as an investment choice. At the same time, the global economy is expected to grow, albeit slowly in 2020.

India was among the lowest-scoring markets, with the Sensex and Nifty rising 14-15 per cent.

Meanwhile, the EU's markets returned 25 per cent on average and the US returned 27 per cent (all local currency returns).

Even China amid the trade war saw indices up by over 20 per cent and so did Japan.

India is under the threat of downgrades in 2020 and it could go underweight in foreign portfolio investors' perceptions.

That leads us to one possible cause for optimism: There could finally be a deep correction that pulls stock valuations down to realistic levels.

This would give investors a chance to get into the market at reasonable price levels.

Another cause for optimism is that, if gross domestic product (GDP) growth and tax collections are truly poor, the February 2020 Budget and projections may be more realistic.

The government may make a serious attempt to trigger consumption and improve ease of doing business.

That would improve growth prospects.

The equations in the Goods and Services Tax Council have changed incidentally, because there are now many non-BJP states, which will insist on a vote for tax changes.

It remains to be seen if this is a good or bad thing.

One positive signal is the improvement in non-performing assets of banks.

This coincides, however, with a severe drop in commercial credit.

Treasury yields have also reduced somewhat even though the full benefit of the five policy rate cuts has not been passed on in the banking system.

If the crisis in the banking system is finally under control, that's surely good news.

The final takeover of Essar by Arcelor Mittal and Nippon Steel also indicates that the IBC is working, albeit slower than envisaged.

This could mean that other big accounts will be resolved in the next year and that would definitely bring comfort to the banks and other lenders with NPA exposures.

There has already been a pullback where small caps and mid caps have corrected by about 30 per cent from their all-time peaks registered in early 2018.

However, these stocks are still trading at pricey valuations of PE 35-plus.

A further correction could help bring them to more reasonable levels.

Where Sensex-Nifty giants are concerned, the price-to-earnings ratios are averaging out at 28-30 with the indices near their record highs (scored earlier this month).

Again a correction is required for these to look attractive.

The next two months will be crucial in that it will determine the course of the next year.

The street-level opposition to NPR/NRC and the CAA have undermined this government's authority, despite the large Lok Sabha majority.

The upcoming Budget will be a vital policy document, and the Centre cannot guarantee that its writ runs without opposition in the GST Council, for example.

If the policy outcomes are unfavourable, the economy could tank for another year.

But even if that happens, you as an investor must stay positive and believe eventually, things will turn around. 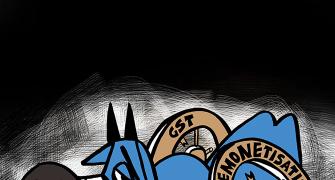