Investing in US: How India helps create American jobs 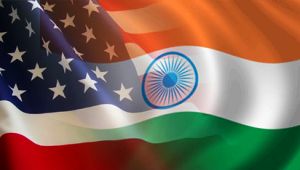 Arguing that the ‘extraordinary economic growth that has in fact been taking place between the United States and India,’ that has translated ‘into thousands of jobs created in both countries, has ‘sometimes been lost in the distraction of the daily headlines,’ is the focus of a major report officially launched by the US-India Business Council titled ‘Investing in America, How India Helps Create American Jobs.’

The report, unveiled at the USIBC’s 38th Anniversary Leadership Summit held in Washington, DC on Thursday, is reminiscent of three earlier reports -- by the Federation of Indian Chambers of Commerce and Industry, the National Association of Software and Services Companies, and the Confederation of Indian industry -- pointing to the significant in-sourcing and massive investment of Indian companies in the US, generating several thousand jobs and community development in education, health, and other areas in various American cities, and the significant and social impact created by these firms on American communities in which they operate.

The report said, “American companies are dedicated to strengthening our economy and to creating as many jobs for Americans as they can,” and noted, “As the US economy makes a steady recovery, employers are hiring each and every day across the country.”

“But here’s a secret that the US-India Business Council is ready to let out of the bag: Indian companies -- and American companies invested in India -- are doing the same thing,” it said.

Acknowledging that the report is aimed at and would be circulated among members of the US Congress, the American public, and even senior officials of the Obama administration, to rebut those with a propensity for political expediency to blame outsourcing by American companies to countries like India as one of the reasons for job losses in America, Ron Somers, president of the USIBC told Rediff.com, “Elected officials and Americans in general need to appreciate the vitality and level of resources being brought to the United States by the Indian diaspora and by investments coming directly from India.”

He asserted, “Never before in our history has the magnitude of talent and resources flow been greater. This is something to be noted and celebrated.”

Somers said, “It is USIBC's goal to get this information out to the general public, and to make our elected officials aware of this grand synchronicity that is special between people who believe in and cherish the free market principles of freedom, which both our counties represent.”

The report features a diverse set of companies from Broadcom Corporation to Caterpillar, General Electric to Harley Davidson, Jubilant Life Sciences Ltd to Ranbaxy Laboratories, Tata Chemicals to Wipro and the likes of Zee TV.

It said these companies ‘provide a wide range of services and products to customers around the world, and what they all share in common is that they do business in both the United States and India, and they are convinced that two-way trade between India and America will revitalise the US economy and help create US jobs.’

It acknowledged that ‘many Americans are aware that India has a fast-growing middle class of consumers and a dynamic young population. Many are also aware that the United States has benefited from investing in India.’

“But doing business with India has other advantages, namely, that US workers directly benefit from this two-way trade,” the report pointed out.

Citing an example, it noted, “When India decides to order turbines or construction equipment from a major US company such as GE or Caterpillar, the order tends to be large owing to India’s population of 1.2 billion. A number of products that are bound for India are still manufactured in the United States where the specialised facilities are employers are.”

Similarly, according to Raj Rajagopal, senior director of Software Systems for Broadcom, based in Santa Clara, California, “A significant part of the software development momentum still comes from Broadcom’s US-based teams. The US teams closely collaborate with other global teams to deliver targeted solutions for markets such as India.”

Kapil Sharma, senior general manager of Tata Sons, says, “Whether it’s coffee or steel, Tata is committed to producing the best possible product for America and, wherever possible, in America, with American workers.”

The report notes that global sales make up half of Caterpillar’s more than $60 billion in total sales, and ‘Caterpillar knew that capturing the Indian construction market would be a major prize.’

“And that’s exactly what it set out to do. Caterpillar has actually been doing business in India since the 1920s, but in recent years, sales of Cat equipment have skyrocketed and India has become the single largest market for the backhoe loader. Caterpillar’s off-highway trucks have become a major export and so have the large mining trucks, which are US-made.”

Rich Lavin, Caterpillar group president with responsibility for Constructions Industries and Growth Markets, states, “We understand that growth is occurring aggressively in markers like India, so we have to be on the forefront of that growth to ensure that we assist our customers and take full advantage of the opportunity.”

The report notes that since GE’s beachhead in India in 1902 when the company installed India’s first hydropower plant, ‘the relationship has only grown stronger as it became increasingly clear that what was good for India was also good for GE employees back in the United States. Now GE exports more than $1 billion in products and services to India. This enables GE to create more jobs for Americans, and in 2011, GE said that it would open more than 8,000 new American jobs, bringing the total to more than 13,000 jobs since 2009.’

The report states that Ranbaxy, India’s largest pharmaceutical company, has a major presence in the US and that ‘with more than 130 approved applications from the Food and Drug Administration, it’s also clear that Ranbaxy takes America’s well-being to heart.’

It notes that ‘at least one Ranbaxy product can be found on the shelves of every US pharmacy,’ and that the company ‘is proud that making affordable drugs for Americans has also created American jobs.’

Bernard Brothman, vice president, Human Resources, notes that ‘Ranbaxy’s investments and job creation have helped bring economic vitality at both the state and federal levels,’ with New Jersey, being the greatest beneficiary, where Ranbaxy’s facility is the company’s largest in the world in terms of manufacturing capacity.

The report also refers to the Green River Plant, a soda ash mine owned by Tata Chemicals in Southwest Wyoming, a place ‘hard to imagine more quintessentially American.’

It notes that the Green River Plant is one of 11 companies that Tata operates in America, hiring around 22,000 workers and points out that ‘when Tata Chemicals bought the soda ash mine in 2008, it chose not to replace any of the 480 employees based on the belief that the people running Green River knew how to run it.’

The report said, “The plant may be largely Indian-owned, but it is American run.”

“That was in keeping with the plant’s strong tradition of employment -- there hasn’t been a layoff at the plant since 1994,’ it said, and added, ‘In fact, some of the miners are third- and fourth-generation employees. Those jobs will be there for the long-term -- the mine has an estimated life of about 300 years.”

Wipro, the Indian information technology giant, the report records, has invested more than $1 billion in the US over the last 10 years, “but the company’s most important investment in the United States is more than financial -- it’s a strategic investment in developing talent, both Wipro’s American clients and its American employees.”

The center of Wipro’s strategic talent -- the Atlanta Development Center in Atlanta, Georgia, according to the report, after it opened in 2008, by the end of 2009, had ‘become one of the largest job creators in the city,’ with more than 650 employees, which was ‘a boon to Georgia because the majority of the facility’s employees are hired from within the state.’

Tino Mantella, president of the Technology Association of Georgia, declares that he’s elated that “Wipro is here and that 80 percent of the people hired will be from Georgia. There’s not a lot of other companies that could make that statement.”

Late last year, the CII released a report titled Indian Roots, American Soil: Adding Value to US Economy and in 2011 FICCI released a similar report and so did NASSCOM to quantify the trends and benefits behind the investments by India-based IT and BPOs in the US in an aggressive effort to counter some of the misperceptions about outsourcing of thousands of the highly-skilled jobs to India, leaving American workers unemployed.