News
Business
Movies
Sports
Cricket
Get Ahead
Money Tips
Shopping
Sign in  |  Create a Rediffmail account
Rediff.com  » Business » 'India is in a sweet spot, in a Goldilocks scenario'

'India is in a sweet spot, in a Goldilocks scenario' Expectations of a good show by India Inc appear to have already been baked into the markets to some extent, believes Manishi Raychaudhuri, head of Asia excluding Japan equity strategy at BNP Paribas Securities.

He says a surge in markets can come from strong earnings upgrades or introduction of FY18 estimates.

He tells Sheetal Agarwal about the road ahead for Indian equity markets.

Do you think the recent rally in Indian markets is sustainable?

Right from the beginning of the year we have been saying that India is likely to do better than other emerging markets.

Now that the market is somewhere close to 27,750 it looks like a lot of the upside has been discounted in the current valuations.

But having said this, I must point out that fundamentally India still looks good compared to many other emerging markets, because of two reasons.

Number one, India is in a sweet spot of being in a so called goldilocks scenario where economic growth is gradually recovering and at the same time interest rates are likely to decline going forward.

The policy rates have already been cut down by about 150 basis points and we think that if inflation moderates further there could be one or two more rate reductions over the next six to nine month period.

These are the two main long term, sustainable advantages that India has. Consequently, we are maintaining our overweight stance on India. 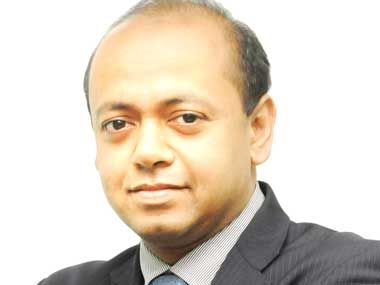 India Inc is expected to post good set of numbers for the June 2016 quarter. How much of the good news is already factored in?

If you look at the headline numbers in our coverage universe we are predicting a 5-7 per cent growth in the revenues on a year-on-year basis and a decline of about 2-2.5 per cent in earnings.

This decline is driven by some sectors or some companies which suffer from an unfair comparison in the April-June quarter.

One burning example is the oil and gas sector. Several companies both in exploration and refining would have significantly lower profits in this quarter compared to the same quarter last year due to multiple reasons.

First, oil prices themselves are significantly lower than last year and second many of these companies would also have impairment losses because their oil and gas reserves are constantly marked down or up in accordance with the rise or fall in oil prices.

So, if I take those oil companies out, this 2-2.5 per cent decline would actually go to 3.5-4 per cent increase in earnings.

Thus, the better way to look at earnings is on an ex-oil and gas basis.

For FY17, I think that this should translate into 10-12 per cent growth in earnings on an average for the Indian universe. This is a significantly better performance than what we have seen over the last three years where earnings growth was flat to two per cent on a year-on-year basis. In fact in one of the years we even had a negative growth.

I think part of the good news is already factored in the market.

For a significant further leg up or re-rating in the market we would need either a high degree of upward earnings revisions or we have to wait for FY18 earnings expectations to get baked in which will only happen in the second half of this fiscal.

How does India stack up vis-a-vis other emerging markets?

As a consequence of the recent out-performance, India's valuations relative to the Asia-ex Japan universe appear a bit stretched.

India has always traded at a 30-40 per cent premium compared to Asia-ex Japan on a Price-to-Earnings or Price-to-Book basis. But now, on Price-to-Book, this premium has gone up to more than 60 per cent which is more than one standard deviation above the long term mean.

So, we think that in the near term, India's valuation premium can narrow down somewhat.

This can happen either by the Indian market correcting slightly or by "time correction"? i.e. the Indian market stays flat while other markets outperform. It is difficult to lay a finger on exactly what will happen.

Consensus expects Sensex companies' earnings to grow 14-15 per cent in FY17 while you peg it lower. Should we expect more earnings downgrades?

I think there is a possibility of a small downgrade and the 14-15 per cent earnings growth expectations would possibly settle somewhere around 11-12 per cent.

So, that means about 2-3 per cent downgrade from here which is not that bad an outcome compared to the double-digit downgrades that we saw in the past two years.

What strategies should investors adopt in these markets?

Despite our belief that the market may turn flattish in the near term, we think there are a few sectors or themes which offer investors decent opportunity for generating alpha.

First of these is the entire investment acceleration theme.

We would also like to play the theme through the cement companies. Cement is one sector which, apart from having the benefit of gradually rising cement prices, also has the benefit of M&A activity.

We have seen several reasonably large deals being announced during last quarter and whenever that happens in any sector, it acts as a solid support to valuations.

So that is one bucket that we are playing in India.

The second would be the private sector banks particularly those which are focused on the retail lending.

We think that is one segment which will do well in terms of growth and a relative lack of non-performing assets. That's the second bucket. The third is the entire rural consumption story.

Good monsoon, especially in the hinterland, is music to the ears of farmers and by extension, to that of investors.

We must remember that over the last two years we have had a very low base as far as agriculture growth is concerned. It was close to zero or marginally negative.

So on the back of that low base, agricultural production growth can easily be somewhere around 4-5 per cent this year which would obviously act as a significant fillip to rural consumption.

In addition to this, the seventh pay commission award will act as a significant tailwind towards consumption in the second and third tier cities.

So the companies which are engaged in the areas of semi-urban and rural consumption, both in staples and discretionary space, constitute the third bucket we like.

Finally, we also like the theme of recovery in the western hemisphere, particularly in the United States.

In the UK and European region economic uncertainty has increased recently, but the Indian IT services sector is clearly more geared towards the US. That's our fourth bucket of preference.

Is the smart money moving to bond markets in recent times?

In the developed markets, particularly in the US, bonds have seen large inflows lately.

Whenever we have a very flat yield curve in the bond market, it tells us that there is a likelihood of an economic slowdown going forward.

Economists often compute the probability of a recession from the yield curve slope.

On the other hand, the equity markets are bullish as ever, S&P touched the all-time high recently.

This is one critical question that most investors are struggling with.

They are trying to figure out which market is giving the right signal.

I think as of now the benefit of doubt is going to the equity market if I go by the performance of both developed and emerging market equities.

But honestly this is one variable that we have to watch very closely.

What are the key concerns of FII investors for the Indian markets?

Most investors would like to remain overweight on India for the time being. The concern is only about valuations.

Suppose the valuation premium comes down to the historical average that should act as a significant catalyst to additional flows.

It means that the Indian valuations will have to decline on a relative basis by about 8 to 10 per cent.

It does not necessarily mean that the Indian markets have to decline 10 per cent.

The correction may come about with other markets outperforming by 8-10 per cent.

Having said that, I don't really see any possibility of mass exodus of investors from the Indian markets.

In our recent interactions with global investors, most appeared satisfied with their overweight positions on India for now.

However, slightly less expensive valuations would make it an easier decision for global fund managers to allocate new money to India.