This year's Laureates have shown how the problem of global poverty can be tackled by breaking it down into a number of smaller - but more precise - questions at individual or group levels, he Royal Swedish Academy of Sciences said. 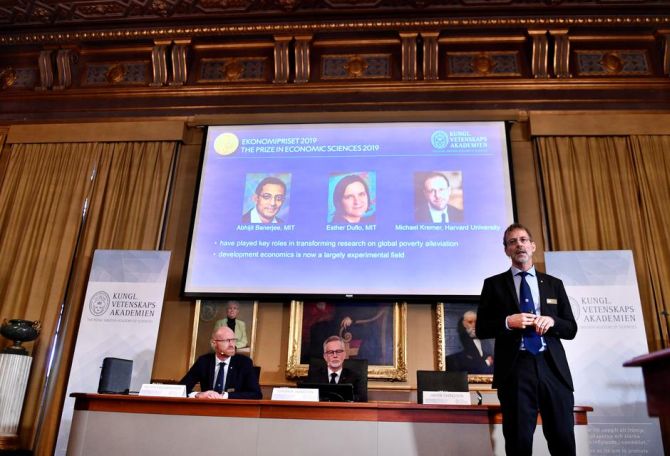 Innovative research by Abhijit Banerjee and his wife Esther Duflo and their extensive field studies in India have not only played a decisive role in reshaping research in development economics but also helped them to win the 2019 Nobel Prize in Economic Sciences on Monday along with fellow-American economist Michael Kremer.

According to The Royal Swedish Academy of Sciences (RSAS), Banerjee, the Indian-American economist at the Massachusetts Institute of Technology, Duflo, his French-American wife, also at the MIT and Kermer, the Harvard University economist, have used innovative research based on field experiments to lay the foundation for the best way to design measures to reduce global poverty.

This year's Laureates have shown how the problem of global poverty can be tackled by breaking it down into a number of smaller - but more precise - questions at individual or group levels, the website of RSAS said.

Over just 20 years, this approach has completely reshaped research in the field known as development economics.

This new research is now delivering a steady flow of concrete results, helping to alleviate the problems of global poverty, it said.

"Using innovative research based on field experiments, Banerjee, Duflo and Kremer have laid the foundation for answering this question that is so vital to humanity," it said.

There has long been an awareness of the huge differences in average productivity between rich and poor countries.

However, as Banerjee and Duflo have noted, productivity differs greatly, not only between rich and poor countries but also within poor countries, it said.

The Laureates' very first studies examined how to deal with problems relating to education, the RSAS said.

In contrast to traditional clinical trials, they have used field experiments in which they study how individuals behave in their everyday environments.

In the first of these experiments, Banerjee, Duflo and others studied remedial tutoring programmes for pupils in two Indian cities.

Schools in Mumbai and Vadodara were given access to new teaching assistants who would support children with special needs.

These schools were ingeniously and randomly placed in different groups, allowing the researchers to credibly measure ­the effects of teaching assistants.

The experiment clearly showed that help targeting the weakest pupils was an effective measure in the short and medium term, the RSAS said.

These early studies in Kenya and India were followed by many new field experiments in other countries, focusing on important areas such as health, access to credit, and the adoption of new technology.

"The three Laureates were at the forefront of this research.

“Due to their work, field experiments have become development economists' standard method when investigating the effects of measures to alleviate poverty," it said.

The experiments designed by them have two distinctive features.

First, the participants made actual decisions in their everyday environments, both in the intervention group and in the control group.

This meant that the results of testing a new policy measure, for example, could often be applied on site.

Second, they relied on the fundamental insight that much of what we want to improve (such as educational outcomes) reflects numerous individual decisions (for example among pupils, parents and teachers).

Banerjee, Duflo and Kremer not only tested whether a certain intervention worked (or not), but also why, the RSAS said.

The Laureates have also been at the forefront of research on the issue of external validity and developed new methods that consider crowding-out effects and other spillover effects, it said.

In their research, Banerjee, Duflo and others showed that targeted support for weak pupils had strong positive effects, even in the medium term.

This study was the start of an interactive process, in which new research results went hand in hand with increasingly large-scale programmes to support students.

These programmes have now reached more than 100,000 Indian schools, the RSAS noted.

They found that students who had teachers on short-term contracts had significantly better test results, but that having fewer pupils per permanently employed teacher had no significant effects.

Development economists have also used field experiments to evaluate programmes that have already been implemented on a large scale.

Banerjee, Duflo and others performed an initial study on a microcredit programme that focused on poor households in Hyderabad.

Their field experiments showed rather small positive effects on investments in existing small businesses, but they found no effects on consumption or other development indicators, neither at 18 nor at 36 months.

Their research has also had an indirect influence, by changing how public bodies and private organisations work.

"This year's Laureates have played a decisive role in reshaping research in development economics. Over just 20 years, the subject has become a flourishing, primarily experimental, area of mainstream economics," it noted.

This new experiment-based research has already helped in alleviating global poverty and has great potential to further improve the lives of the most impoverished people on the planet, the RSAS commented.

Source: PTI© Copyright 2021 PTI. All rights reserved. Republication or redistribution of PTI content, including by framing or similar means, is expressly prohibited without the prior written consent.
Related News: RSAS, Abhijit Banerjee, Esther Duflo, The Royal Swedish Academy of Sciences, Massachusetts Institute of Technology
SHARE THIS STORY
Print this article 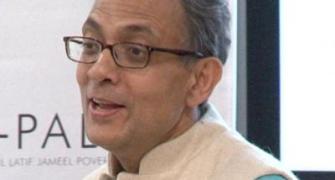 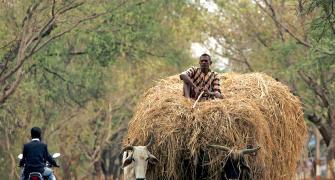