‘To be an immigrant, a South Asian immigrant of colour, a woman to be included in the Portrait Gallery... it really says that we are the country where people look for the people who make a positive impact and celebrate them,’ Nooyi, 64, told reporters during the portrait gallery induction ceremony on Sunday. 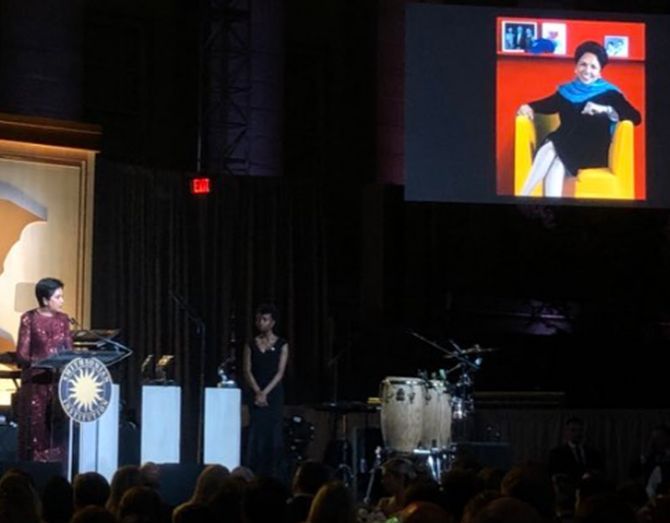 Founded by Congress in 1962, the Smithsonian National Portrait Gallery tell the story of America by portraying the people who have made significant contributions to the history, development, and culture of the people of the US.

Over the years the collections -- which were initially restricted to paintings, prints, drawings and engravings -- have grown to over 23,000 items in all media, from daguerreotypes to digital.

"To be an immigrant, a South Asian immigrant of colour, a woman to be included in the Portrait Gallery... it really says that we are the country where people look for the people who make a positive impact and celebrate them," Nooyi, 64, told reporters during the portrait gallery induction ceremony on Sunday.

"It doesn't matter what your background, colour, creed, ethnicity is. As long as you've made a positive impact to the country, we are going to celebrate you -- actually memorialise -- which I thought was even more spectacular," she said.

The gallery has about 23,000 portraits in its permanent collection and adds 150 to 200 per year with 500 to 600 works on public display at any given time, the Washington Post reported.

Historians consider new names and then work with gallery board members to select who should be included and commission their portraits. The process can take a year, even more if the sitter and artist take a long time to complete a work, it said.

"I feel very grateful to be making a home here in this country because this portrait gallery is an accolade which I've never dreamed of. And it's heartwarming to see this," Nooyi said.

Among others included in the portrait gallery were Frances Arnold, Lin-Manuel Miranda and the Earth, Wind and Fire.

The portrait of Nooyi has been drawn by artist Jon Friedman and looks like a photograph. Nooyi said she watched Friedman paint it as she saw it in different stages.

"He wanted to bring the inner me out in the portrait. So he took hundreds of pictures, then he picked one and drew from that. I watched every hair being painted and so he did a great job," she said.

"I think the big difference in my portrait is that they asked me a question, what's meaningful for you - a picture of my parents, picture of my husband and kids, a picture of a PepsiCo annual report or a Yale (University) hat. All these are major factors in my life. So, it's in a way an unusual portrait because I have all that behind me, which most portraits don't have," she said.

Nooyi said when she received a letter last year, she thought it was a joke and asked her PR department to take care of it.

"They came back and said no, it's not a job, it's for real," she said, adding she came down to the Portrait Gallery thereafter to see for herself.

Nooyi said she realised that portraits at the gallery were chosen to tell the story about the history of the US, not just for the people here today, but for generations to come.

Kim Sajet, director of National Portrait Gallery, inducted Nooyi into the portrait gallery, recognising her accomplishments as a businesswoman and also as an immigrant.

"Indra has run a Fortune 500 company," she said on the sidelines of the National Portrait Gallery's gala that was attended by several celebrities including former First Lady Michelle Obama and former Secretary of State Hillary Clinton.

Born in Chennai, Nooyi stepped down on October 2 last year as PepsiCo's CEO, after 24 years with the company, the last 12 as CEO of the global beverage giant. During her 12-year tenure as chief executive, Nooyi transformed PepsiCo into one of the most successful food and beverage companies worldwide.