Chhatrapati Shivaji Maharaj hospital at Kalwa in Thane will be one of the first buildings in India to have a 160-tonne solar air conditioning system. Installation of the parabolic reflecting mirrors, heat receivers, insulated plumbing, boilers for storing the steam and the vapour absorption machine is complete. 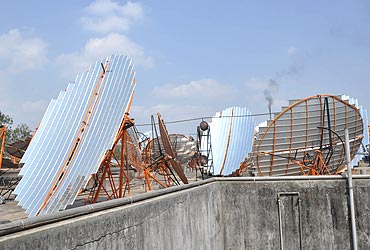 The authorities are ironing out the chinks before the system would be officially dedicated to the people. The entire project costs Rs 3.99 crore (Rs 39.9 million) and is estimated to save electricity worth Rs 40 lakh (Rs 4 million) per year.

In 2004, when TMC installed solar water heaters and incorporated several energy efficiency measures at the hospital, it received the national award for best use of non-conventional energy from the then President APJ Abdul Kalam.

Buoyed by the national recognition for being energy efficient, TMC decided to reduce the dependence of conventional energy for the air conditioning system. The project has taken almost four years in the making - right from the conception stage, to the drawing board and lastly the implementation stage.

In the first phase about 93 dish shaped mirror also known as schauffler parabolic concentrators have been installed. The mirrors with high reflectivity are focused on receivers containing water through a tracking system.

The parabolic mirrors are capable of generating 700 kg of steam per hour. The steam is routed through boilers for storage and getting the desired pressure to be fed in to the Vapour Absorption Machine. The VAM with lithium bromide absorbers chills the water and steam which separates the absorbent from the water. The chilled water is circulated through existing ducts cooling the air flowing in it.

The circulation of steam, air and water are done with a 15 hp pump which is in the process of becoming independent of the power supplied by the electricity company.

"In the same premises we are also running a bio-methanisation plant in which methane gas is generated from wet garbage. The generated gas fuels a power generator. We are in the process of laying the cable from methane gas power generator to the pump that runs the VAM," said Pote.

The bio-methanisation plant generates about 800 electrical units per day. The fact that an average two BHK household in Mumbai would consume about 300 units per month would give an understanding of power generation capabilities from garbage at the hospital.

Lot of planning and effort has gone to ensure that the solar AC plant is totally independent of conventional energy. Even the tracking devices that control the movement of the mirrors maintaining its focus on the receivers is power by photovoltaic cells.

During inclement weather and cloudy days, the steam would be generated with carbon neutral briquette made from agricultural waste such as bagasse.

"We realised hospitals, particularly in India are notorious for spreading airborne diseases through the central AC system. This problem was resolved by incorporating a liquid desiccant system by the IIT, Mumbai. This system dehumidifies the air and circulates air free of moisture which is not conducive for the pathogens in the air," said Pote.

As hot water is generated as a by-product it will be also used for drinking, bathing and laundry. The steam which is generated will also be used for disinfecting the linen in the laundry and sterilise surgical equipments. Currently, the steam is generated from boilers fuelled by high speed diesel which will be shutdown, thereby reducing the carbon emissions. 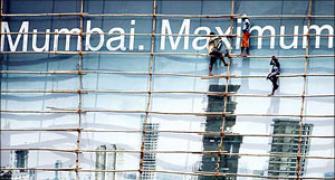