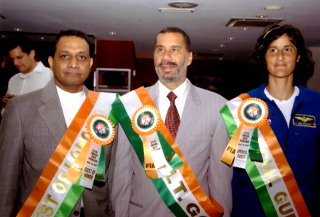 Indian-American businessman and political activist Andy Shenoy has been appointed to the Tourism Advisory Board of the Empire State Development Corporation by the New York governor David Patterson.

Shenoy, the only Indian-American to serve on the advisory board, has earned the reputation throughout the New York State and in the US for his work promoting economic ties between the State and several Indian states.

"New York State is one of the top travel destinations for tourists from around the world. We must do all we can to enhance the image of our state. The world, especially India loves New York," said Shenoy, president of Trivision group Inc.

"We must continue to strengthen our ties with India and the South Asian community. This is a relationship that provides a mutual benefit for everybody," he said.

Shenoy has served as president of Indo-American Promotion -- a nonprofit organisation promoting greater understanding and economic development locally between India and with the South Asian communities.

In Pataki administration, he served as special advisor for South-Asian Affairs.