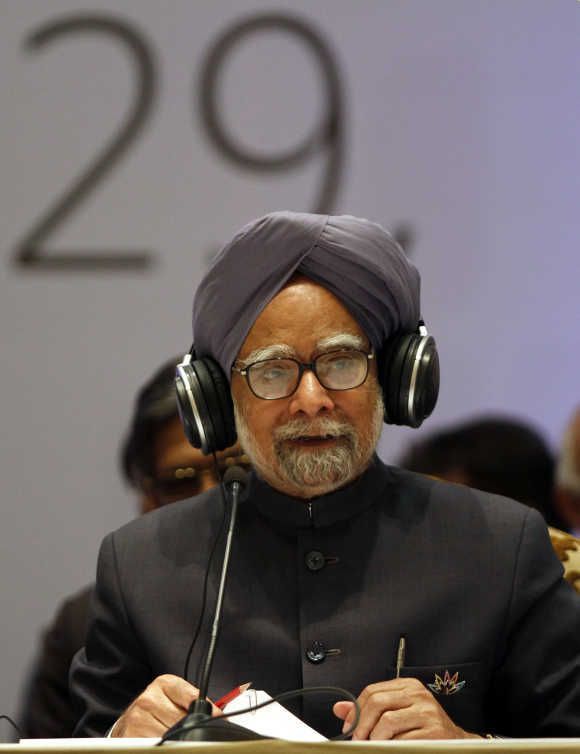 Eyeing greater cooperation with South East Asian countries on economic and security issues, India on Thursday announced a separate Mission for ASEAN region to be set up in Jakarta with a full-time resident Ambassador.

Addressing the 11th ASEAN-India Summit in Brunei, Prime Minister Manmohan Singh also said that India was ready to sign a Free Trade Agreement (FTA) with ASEAN on services and investment to boost their bilateral trade to $100 billion by 2015, from $76 billion last year.

Singh said over the last two decades, India and ASEAN have established a comprehensive agenda of cooperation and a wide-ranging framework to pursue it. "Today, we stand on the threshold of the third decade of our engagement. In keeping with our substantial achievements, the recent elevation of our ties to a strategic partnership and the rich potential of our cooperation, I feel it would be appropriate for me to take this opportunity to announce that India will soon set up a separate Mission to the ASEAN in Jakarta with a full time resident Ambassador," he added.

The secretariat for ASEAN (Association of South East Asian Nations), a ten-member block of countries including Brunei, Indonesia, Malaysia, Myanmar, Singapore, Thailand and Vietnam, is based in Jakarta.

Singh said that all the "countries have equal stakes in the security and prosperity of our shared Asian neighbourhood. "The global economic crisis and turmoil in different parts of the world underscore the salience of our robust partnership. The scope of India’s engagement with East and Southeast Asia has grown steadily in the last two decades.

"We seek to promote not only mutually beneficial bilateral relations, but also to work institutionally with regional partners and foster a climate that is conducive to stability, security and economic development in our region," he added.

The Prime Minister said that ASEAN has paved way for a great level of "cooperation and integration, not only among themselves, but also in the broader region.

"For India, it is an article of faith of our Look-East policy that ASEAN must remain central to the future evolution of regional mechanisms, which must be open and inclusive. We share your vision and aspirations for the region and we applaud your march towards an ASEAN Economic Community in 2015," he added.

About progress on relations between India and ASEAN, Singh said that "India stands ready for the signature of the India-ASEAN Free Trade Agreement on Services and Investment by the end of this year and its early implementation.

"This will complement our Agreement on Goods and bolster our economic partnership," he said, while adding that initiatives have also been taken by the Federation of Indian Chambers of Commerce and Industry (FICCI) to revitalise the ASEAN-India Business Council and to set up an ASEAN-India Trade and Investment Centre.

"These measures will contribute to stronger trade and investment flows between us," Singh said, while expressing confidence in meeting the target of $100 billion India-ASEAN trade by 2015 and doubling that volume (to $200 billion) by 2022.

Singh said that connectivity is a strategic priority in India-ASEAN relationships, while adding that the Tamu-Kalewa-Kalemyo sector of the India-Myanmar-Thailand Trilateral Highway was near its completion.

"Repairs to 71 bridges on this road and work on upgrading a 120 km sector between Kalewa and Yargyi are to begin soon. We will work closely with Thailand and Myanmar to ensure that this project is completed by 2016.

"It would be useful to look at the extension of this Highway to Laos, Cambodia and Vietnam, its further linkage with ports in ASEAN countries and its integration with models like Special Economic Zones. This would call for innovative financial and institutional mechanisms. I hope our Ministers and officials can discuss these ideas further," he added.

The first meeting between the ASEAN Connectivity Coordinating Committee and India took place this year. It has been decided to establish a Working Group on Soft Infrastructure along India's corridors of the connectivity.

Singh said that Indian officials will soon begin discussions on an ASEAN-India Transit Transport Agreement with a view to completing it by 2015. "I also look forward to the proposed Maritime Transport Working Group being set up soon," he added.

The ASEAN summit is being held here in the Brunei Darussalam's capital city of Bandar Seri Begawan and this year's theme is "Our People, Our Future Together".

Terming this theme as "indeed appropriate", Singh said, "People-to-people engagement must also sustain the India-ASEAN Strategic Partnership. We must create a policy environment and visa regime that facilitates our professionals and entrepreneurs to travel and work across our region."

Prime Minister said that India has also set up an ASEAN-India Centre in New Delhi to supplement efforts towards cooperation in areas like exchange programme for students, farmers, diplomats, media and parliamentarians and Think Tanks.

In his opening remarks at the India-ASEAN summit, Singh said" "Many of our cooperative projects with the ASEAN under the Plan of Action for 2010 to 2015 are coming to fruition.

"The project to establish a Satellite Tracking and Data Reception Station and Data Processing Facility in Vietnam and the upgrading of a Telemetry Tracking and Command Station in Indonesia will begin to see implementation by April 2014.

"Projects to set up four IT Centres in CLMV (Cambodia, Lao PDR, Myanmar and Vietnam) countries, supported by a Resource Centre located in India, have also been finalised for implementation." Singh also thanked the ASEAN nations for their support to the revival of the Nalanda University.

"Nalanda is a common heritage of India and Southeast Asia. As the University begins its academic programme next year, I would welcome active participation of ASEAN students and faculty in making it a successful venture," he said, while indicating towards the prevalence of Buddhism culture in many south east Asian nations.

He also stressed on the fact that "the growing strategic content in relations between India and ASEAN responds to our shared security challenges and supplements India’s deepening security cooperation with ASEAN countries bilaterally."

"India and ASEAN have identified eight focus areas for cooperation on transnational crime and that we are in the process of formulating a work plan to combat international terrorism," he added.

Later in his concluding remarks, Singh said that the Plan of Action for 2010-2015 to implement the ASEAN-India Partnership for Peace, Progress and Shared Prosperity was fully underway.

"In particular, we should intensify the integration of our economies through commerce and connectivity. We must ensure signing of the ASEAN-India FTA on Services and Investment within this year and its rapid implementation.

"I am happy to note the growing engagement between our respective private sectors and their initiative to establish joint ventures in third countries. To further support these efforts, we have been holding investment roundtables in ASEAN countries," he said.

Singh further said that India would be "happy to respond to the ASEAN request to develop the security dimensions of India's Look East Policy to strengthen the ASEAN Political Security Community Blueprint 2015.

"In this context, we look forward to the workshop being hosted by Brunei Darussalam next month."

"Our projects under the ASEAN-India Cooperation Fund, the Science and Technology Development Fund and the Green Fund are meant to build capacity and promote integration in the ASEAN region," he said, while reiterating India's promise to extend all possible assistance within its capacity towards the goal of an ASEAN Community by 2015. 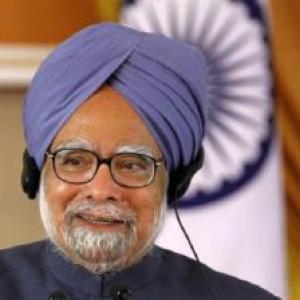 In Brunei, PM emphasises on consensus over South China Sea 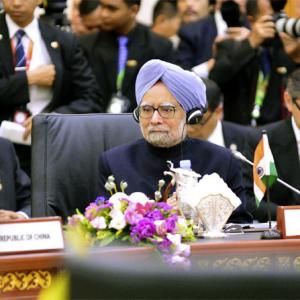