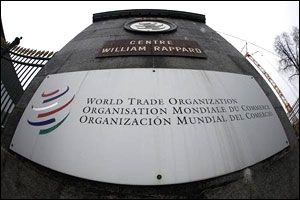 Prime Minister Narendra Modi on Thursday pitched for a permanent solution to the food security and agriculture subsidy issues at the Nairobi WTO meet, to be held later this year.

While addressing the inaugural ceremony of the third India-Africa Forum Summit, he said India and Africa also seek a global trading regime that serves development goals and improves trade prospects.

"When we meet at Nairobi Ministerial of the WTO in December, we must ensure that the Doha Development Agenda of 2001 is not closed without achieving these fundamental objectives," he said.

"We should also achieve a permanent solution on public stock-holding for food security and special safeguard mechanism in agriculture for the developing countries," he said.

The WTO's General Council, the highest decision making body of the organisation, had accepted India's demand for extending the peace clause till a permanent solution is found for its food stockpiling issue.

For a permanent solution to the food security issue, India had proposed either amending the formula to calculate the food subsidy cap of 10 per cent which is based on the reference price of 1986-88 or allowing such schemes outside the purview of subsidy caps.

Talking about bilateral trade between India and Africa, Modi said, the trade has more than doubled to over $70 billion in less than a decade.

Modi emphasised on deeper India-Africa partnership on clean energy and invited African nations to join an alliance of solar-rich nations that he proposes to announce in the upcoming climate talks in Paris.

Referring to the developed world, he said that the excess of a few cannot become the burden of many as he hoped for a comprehensive and concrete outcome based on established principles in the UN Convention on Climate Change.

Africa and India, Modi said, are "two bright spots of hope and opportunities in the global economy".

He said that in less than a decade, India-Africa trade has more than doubled to over $70 billion and India is now a major source of business investments in Africa and 34 African countries enjoy duty free access to the Indian market.

India and Africa also seek a global trading regime that serves their development goals and improves trade prospects, he said, adding that at the Nairobi Ministerial of the WTO in December, "we must ensure that the Doha Development Agenda of 2001 is not closed without achieving these fundamental objectives".

He said India will help develop infrastructure, power, irrigation, agriculture and resources in Africa and, set up industrial and information technology parks.

"We will make available our space assets and technology," Modi said while also promising to work to reduce digital divide within Africa and between Africa and the rest of the world.

"We will expand and extend the Pan Africa E-Network, conceived by late President APJ Abdul Kalam, which links 48 African countries to India and to each other.

"This will also help set up your Pan Africa Virtual University," he said. Swaraj to Africa: 'Make in India'