The first of its kind, a gem bourse to cater to the needs of the gemstone industry of the PinkCity where all the business could be transacted under one roof would soon become a reality. 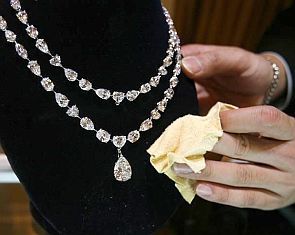 The Rajasthan state government has approved a proposal to set up the bourse at the City’s GemPark.

The gemstone industry which employs 100,000 persons and with annual exports worth Rs 1700 crores (Rs 17 billion) after more than two decade of wait would be able to get bourse.

There are diamond bourses in many cities of Europe, Asia and in US where diamond business are transacted, but there is no exclusive bourse for gems, and the city which is the world's biggest centre of lapidary was demanding a bourse for which the state government has agreed to provide land.

The Union government has already earmarked Rs 45 crore (Rs 450 million) that would be given as a one-time grant to set up the bourse through the ministry of commerce.

Siddharth Singh Joint Secretary of the commerce ministry said the this grant would be made available to promote the coloured gemstone industry of Jaipur and this would enable the gem stone industry to flourish in an organized way as all the business could be transacted under one roof.

The state government has approved the proposal of the Gem & Jewellery Export Promotion Council (GJEPC) and the Jewellers Association of Jaipur’s proposal to set up the state-of-the art gem bourse at Rajasthan Industrial Investment Corporation (RIICO) GemPark on Tonk Road.

This land on way to the airport was earmarked by the RIICO and the land was allotted to the public sector unit Diamond Trading Corporation, but for various reasons the park could not come up.

It is learnt that the RIICO will make available 40,000 square meter of land for setting up the bourse at the GemPark.

It is likely that in future more land would be made available to the proposed gem bourse.

regulatory body or a company with the representation of the state government, Jewellers Association and GJEPC would be set up for building the bourse.

Vipul Shah, the chairman of the GJEPC said that the GJEPC has given numerous proposals to the union ministry of commerce and one of this was the setting up a bourse for the Jaipur gem industry.

Shah said the proposed gem bourse will provide infrastructure to 2,000 offices of gems and jewellery manufacturers, traders along with the offices of customs, customs bonded area, banks, insurance etc.

The bourse will be the hub for the trade and facilitate exports from Jaipur, which will give boost to the foreign trade and generate additional employment in the state.

Rajiv Jain, the former chairman of the GJEC and the head of the GJEC’s Jaipur chapter who was handling the issue with the government said that after the approval to set up the gem bourse, the RIICO will hand over the land to the regulatory body that will run the bourse.

Shah said the value addition in the form of gemstone-studded jewellery and its exports from India is growing with the creation of the Sitapura Special Economic Zone. He said the shows like the JJS and the Jewelers Association’s show (JAS) has not only created awareness, but has also helped in the growth of the coloured stones exports.

Shah admitted that the industry faced slowdown in the last few months, but he was confident that the year 2014 will be positive for the sector.

He said the biggest advantage would be that the miners of the gemstone would now be able to come to Jaipur and showcase their products to large scale rough (gemstone rocks) manufacturers and thus everybody would get an opportunity to buy the best.

Currently a British firm Gemsfields organises auction of the emerald rough of African origin in the city.
PB Chandra in Jaipur