India is looking at near close to double-digit growth this year and the country will be one of the fastest-growing economies, Finance Minister Nirmala Sitharaman has said. 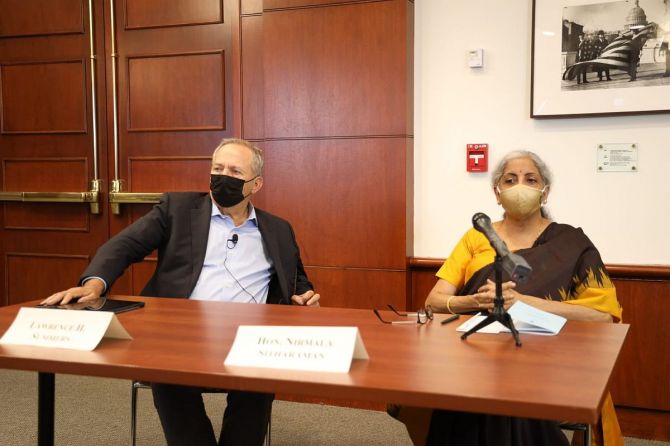 The minister also emphasised that she expects the economic growth next year to be in the range of 7.5-8.5 per cent, which will be sustained for the next decade.

“As regards the growth of India, we are looking at near close to double-digit growth this year and this would be the highest in the world.

"And for the next year, on the basis of this year, (the) growth would definitely be somewhere in the range of eight (per cent),” Sitharaman said in Boston on Tuesday during a conversation at Harvard Kennedy School.

She noted that while the Ministry of Finance has not done any assessment as yet about the growth number, but the World Bank, IMF and rating agencies have all come nearer to this kind of growth number for India.

"And I expect that to be sustained for the next decade because of the rate at which expansion in core industries is happening, the rate at which services are growing, I don't see a reason for India to be any way lesser than” in the next coming decades, she said.

During the conversation with Professor at Harvard University Lawrence Summers during the talk organised by the Mossavar-Rahmani Center for Business and Government, Sitharaman, when asked about the state of the global economy, said: “I don't think you can have one picture for the entire globe.

"The emerging market economies are likely to recover speedily and are likely to have a growth trajectory, which will probably be even the title of engine for growth.

"They are the ones who are going to be pulling forward the global economy.”

“And in that, at least from the data which has been released yesterday and the week before, I can say that India's growth this year will be the highest in the world, of course, based on a lower base of last year, but that will continue into the next year.

"And even there, we will be one of the fastest-growing economies,” she noted.

She added that some other countries in the emerging market areas will also record high growth rates.

“The developed world will also catch up… because their base is very high. So, the growth that they can show off will not be closer to double-digit but certainly will be also adding to the global growth,” she said, adding that she sees "different picture in different regions”.

When asked about the sustained growth of 8 per cent, a historical rarity, her medium and long term vision of where that growth is going to come from, Sitharaman underlined that the growths post-pandemic of any country can be compared with what had happened earlier, prior to the pandemic.

“The reset which the globe has seen itself tells you a narrative that the way in which countries are going to plan their growth is going to be very different from what it was earlier,” she said.

“Therefore, the industry is the first one to get out. Investments are the first ones to get out and they are looking for destinations where certain assumptions can be taken up - rule of law, democracy, transparent policies and assurance that you're with a broad global frame of things and that you are not an outlier, that you will not have anything to do with the global scheme of things, and it's no good for us.”

The minister said all these are extraneous factors that helped India to attract industries to set businesses there.

She also pointed out that India itself is a huge market.

“Today, our demographic dividend is not a dividend without reason. It's a dividend, which has great purchasing power ability.

"The middle class in India has the money to buy things,” she said, adding that the people who are moving from other destinations to invest in India and to produce in India will have a captive market.

“The same demographic dividend also gives us another advantage - the youth population of India today is a skilled set of youngsters skilled in various different areas, most of them in STEM,” the minister noted.

Sitharaman said India will attract investments and have the purchasing power to demand the best of things from whoever produces it.

India is even today best in agriculture. “The food security of many countries depend on imported food.

"Many in the Middle East depend on India for their basic food materials.

"We will be one of the largest exporters of food and food processed materials,” she added.

Similarly, labour intensive units, partly-skilled labour-intensive sectors such as textile, footwear, leather, and certain parts and components for the industry are all manufactured in India.

“So, I see every reason to believe that this 7.5 to 8.5 (per cent) growth is absolutely sustainable for the next decade.

"These are features that don't exist in any one country all put together.

"You may have one in one country, and the other in a different country. But India has it all,” the minister said.

Yoshita Singh in Boston
© Copyright 2021 PTI. All rights reserved. Republication or redistribution of PTI content, including by framing or similar means, is expressly prohibited without the prior written consent.