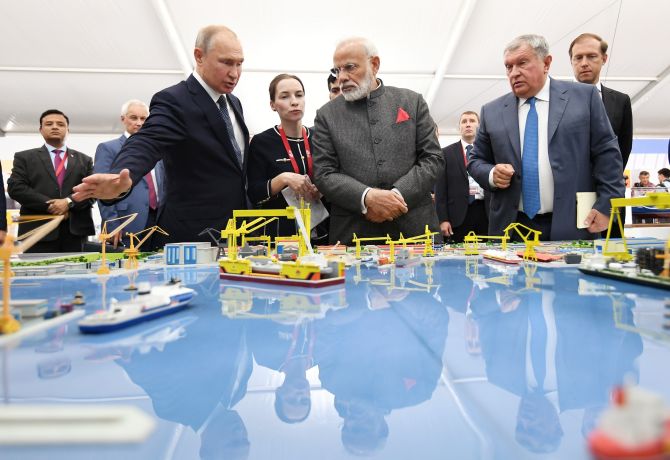 Addressing the plenary session of the 5th Eastern Economic Forum (EEF) here, Modi, who was the chief guest, said it was a "unique case" of India providing such special credit line to a region in another country.

"For the development of the Far East, India will give line of credit worth $ 1 billion. My government has actively engaged East Asia as part of its 'Act East' policy," Modi said at the well-attended meeting, hosted by Russian President Vladimir Putin.

"I am confident that this step will give new impetus to the development of economic diplomacy and growth of ties between the regions of our friendly states. We will remain active partners in our priority cooperation," he said.

Terming the grant of $ 1 billion to Russia's Far East an "unprecedented case", the prime minister said this was "our launching pad" in the region where India is "very active".

Modi said the friendship between India and Russia was not restricted to governmental interactions in capital cities, but was about people and close business relations.

"India's connection to Russia's Far East go back a long way. India was the first country to open a consulate in Vladivostok," he said.

"The EEF is an example of President Putin's stupendous efforts to further develop the Far Eastern Region and India will support him in this endeavour," he said.

"By declaring the development of the Russian Far East a 'national priority for the 21st century', President Putin has taken a holistic approach towards improving everything ranging from economy, education, health to sports, culture or communication," he said.

The climate in the Far East is extremely harsh. The winter lasts nearly nine months, snow covers the ground almost all year round.

According to official figures, region, which is spread across an area of 6,952,555 sq km, has a population of just 8.1 million.

"Let us deepen the bond between India and Russia even further... India is proud of the achievements of the Indian diaspora.

“I am sure here in the Russian Far East, too, the Indian diaspora will make an active contribution towards the region's progress," Modi said.

"India is proud to be an active participant in the Eastern Economic Forum. High level delegations from India have come to this prestigious Forum.

“We look forward to stronger India-Russia cooperation in areas like healthcare, education, skill development and more sectors," he said.

"This is a region known for courageous and talented people. India looks forward to boosting cooperation with Russia's Far East," he said.

India concluded around 50 agreements worth $ 5 billion at the EEF-2019, according to the prime minister.

"We concluded 50 agreements worth $ 5 billion at this forum," Modi was quoted as saying by the Russia's official news agency TASS.

Modi also said the sanctions imposed by the US on Russia have no effect on India bolstering cooperation with Moscow in the strategic sectors like energy and defence.

"(Sanctions) are no hindrance for both the countries," Modi said when asked for his views on the US imposing economic sanctions against companies and countries.

Indian firms have invested over $ 7 billion in taking stake in Russian oil and gas fields. India ventured into Russia when its flagship overseas firm ONGC Videsh in 2001 acquired a 20 per cent stake in Sakhalin-1 oil and gas field in Far East Russia.

OVL later bought Imperial Energy, which has fields in Siberia, as also stakes in Vankor oilfield in eastern Siberia.

Indian Oil Corporation and its partners have picked up 29.9 per cent stake in a separate Taas-Yuryakh oilfield in East Siberia.

Russian oil firm Rosneft in 2017 bought Essar Oil, which operates in Vadinar oil refinery in Gujarat and some 5,500 petrol pumps, for $ 12.9 billion.

In his address, Prime Minister Modi also emphasised India's commitment to become a five trillion dollar economy by 2024 and explained some of the major steps taken by his government to boost the economy.

Modi, who arrived in Russia on a two-day visit on Wednesday, is the first Indian prime minister to visit to the Russian Far East Region.

The EEF focused on development of business and investment opportunities in the Russian Far East Region, and presented the enormous potential for developing close and mutually beneficial cooperation between India and Russia in the resource-rich region.