Trump said that his proposal should be supported by both parties (Republican and Democratic) as a fair compromise -- one where nobody gets everything they want, but where the country gets the critical reforms it needs. 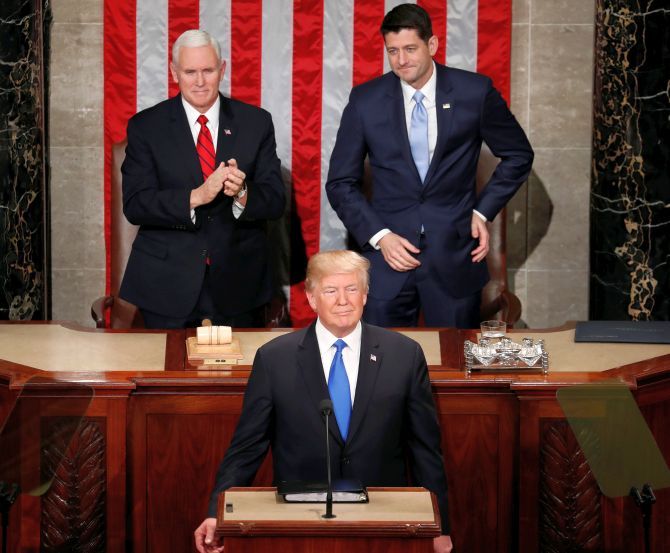 Image: US President Donald J Trump with Vice President Mike Pence and Speaker of the House US Representative Paul Ryan at his maiden State of the Union address. Photograph: Joshua Roberts/Reuters.

American President Donald Trump on Tuesday urged the US Congress to pass a legislation that promotes merit-based immigration, a move that would benefit hundreds of thousands of Indian professionals.

He proposed a pathway to citizenship for almost 1.8 million illegal immigrants who were brought in the US by their parents at a young age.

"It is time to begin moving towards a merit-based immigration system -- one that admits people who are skilled, who want to work, who will contribute to our society, and who will love and respect our country," Trump said in his first State of the Union address.

The State of the Union address is a traditional annual speech of the US president to a joint session of the Congress where he gives an account of the situation in the country.

This includes building a wall, and ending chain migration and diversity visa.

Trump said that his proposal should be supported by both parties (Republican and Democratic) as a fair compromise -- one where nobody gets everything they want, but where the country gets the critical reforms it needs.

"The first pillar of our framework generously offers a path to citizenship for 1.8 million illegal immigrants who were brought here by their parents at a young age – that covers almost three times more people than the previous administration.

"Under our plan, those who meet education and work requirements, and show good moral character, will be able to become full citizens of the United States," Trump said.

The second pillar fully secures the border, that means building a wall on the southern border, and it means hiring more people to keep the communities safe.

"Crucially, our plan closes the terrible loopholes exploited by criminals and terrorists to enter our country -- and it finally ends the dangerous practice of 'catch and release'," Trump said.

Trump said the third pillar ends the visa lottery -- a programme that randomly hands out green cards without any regard for skill, merit, or the safety of Americans.

The fourth and final pillar protects the nuclear family by ending chain migration, he said, ruing that under the current broken system, a single immigrant can bring in virtually unlimited numbers of distant relatives.

"Under our plan, we focus on the immediate family by limiting sponsorships to spouses and minor children. This vital reform is necessary, not just for our economy, but for our security, and our future," he said.

Trump said in recent weeks, two terrorist attacks in New York were made possible by the visa lottery and chain migration.

In the age of terrorism, these programmes present risks we can no longer afford, he said.

"It is time to reform these outdated immigration rules, and finally bring our immigration system into the 21st century," Trump said.

"These four pillars represent a down-the-middle compromise, and one that will create a safe, modern, and lawful immigration system. For over 30 years, Washington has tried and failed to solve this problem. This Congress can be the one that finally makes it happen.

"Most importantly, these four pillars will produce legislation that fulfils my ironclad pledge to only sign a bill that puts America first. So let us come together, set politics aside, and finally get the job done," Trump urged the lawmakers.

Also, in a stern warning to countries like China, President Donald Trump today said the era of America's "economic surrender" is over and the US is seeking to enter into new trade agreements with nations that commit to fair and reciprocal trade.

In his first State of the Union address, Trump said his administration will work to fix bad trade deals and negotiate new ones to protect American workers.

"We will protect American workers and American intellectual property, through strong enforcement of our trade rules,” he said.

"The era of economic surrender is over. From now on, we expect trading relationships to be fair and to be reciprocal. We will work to fix bad trade deals and negotiate new ones,” Trump said.

Trump had earlier criticised the one-sided and unfair trade relationship between the US and China and asserted that America must address the unfair trade practices that drive the trade deficit.

Trump said his economic policies were resulting in new confidence in the country.

"Since the election, we have created 2.4 million new jobs, including 200,000 new jobs in manufacturing alone. After years of wage stagnation, we are finally seeing rising wages,” he said.

"Small business confidence is at an all-time high. The stock market has smashed one record after another, gaining USD 8 trillion in value. That is great news for Americans' 401k, retirement, pension, and college savings accounts,” he said.

Referring to his tax cuts and reforms, Trump said the massive tax cuts provide tremendous relief for the middle class and small businesses.

"To lower tax rates for hardworking Americans, we nearly doubled the standard deduction for everyone. Now, the first USD 24,000 earned by a married couple is completely tax-free. We also doubled the child tax credit. A typical family of four making USD 75,000 will see their tax bill reduced by USD 2,000 -- slashing their tax bill in half,” he said.

Trump said he slashed the business tax rate from 35 per cent all the way down to 21 per cent, so American companies can compete and win against anyone in the world. These changes alone are estimated to increase average family income by more than USD 4,000.

Small businesses have also received a massive tax cut, and can now deduct 20 per cent of their business income, he said.

“Since we passed tax cuts, roughly 3 million workers have already gotten tax cut bonuses -- many of them thousands of dollars per worker. Apple has just announced it plans to invest a total of $350 billion in America, and hire another 20,000 workers,” said the president as he described this as a "new American moment".

"There has never been a better time to start living the American Dream,” he said.

Trump said in his drive to make Washington accountable, his administration has eliminated more regulations in the first year than any administration in history.

He said many car companies are now building and expanding plants in the United States -- something not seen for decades.

Chrysler is moving a major plant from Mexico to Michigan; Toyota and Mazda are opening up a plant in Alabama.

"Soon, plants will be opening up all over the country. This is all news Americans are unaccustomed to hearing -- for many years, companies and jobs were only leaving us. But now they are coming back,” he said. 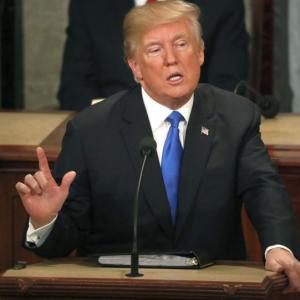