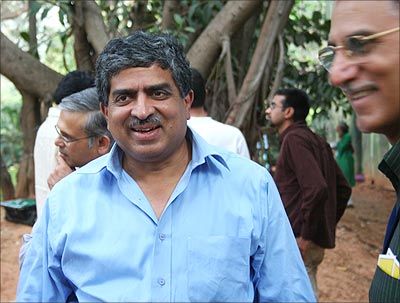 The Indian Institute of Technology Bombay Alumni Association held a valedictory conference, signifying the closing of the IIT Bombay Golden Jubilee Celebration at The Lalit Ashok in Bangalore on March 14.

The event took off with an introductory speech by Dr Ajit Ranade appreciating the  achievements of IIT Bombay. Among the other speakers were Dr Anil Kakodkar, chairman of the board of governors, IIT-B, Infosys chief Nandan Nilekani and Prof. R K Shevgaonkar, deputy director of finance and external affairs and the co-chairman of the IITBAA.

Ranade is based in Mumbai and is the chief economist at the Aditya Birla group, a multi-national conglomerate.

A 1982 B-Tech, he is a member of IIT-B's advisory council, senate and has served the IITBAA as director and chairman.

His speech, punctuated with humour, harped on the theme of the event -- kal aj aur kal. The first kal, according to Ranade, stood for the gumboots that the IITians explored the streets of Mumbai in.

Aj symbolised the changes that have taken place in the IIT-B campus -- the introduction of elevators, a Domino's Pizza outlet etc. The last kal, he said, meant the changes that are bound to take place in near future.

These about-to-happen changes were later elaborated upon by Prof Devang Khakhar, one of the other speakers.

Ranade narrated a few incidents from the annals of IIT-B.

"It is only in Bombay IIT that former IITians comprise more than 50 per cent of the faculty", Ranade said.

His speech was followed by the presentation of a video clip Dr Anil Kakodkar, chairman of the board of governors, IIT-B.

Kakodkar congratulated those involved in making the event a success. "It feels great to know that we have a strong alumni always connected to their alma mater", he said.

After Kakodkar, the audience was gifted with an inspiring speech by Infosys chief Nandan Nilekani. He put forth his personal views of the event and reasoned why it was important for every IIT-B alumnus to be present there.

"This is one of the biggest events taking place outside Mumbai and is the result of a great team effort', he said.

"We, IITians, have not only excelled in the same field that we started with, but those who chose a different track also succeeded in their ventures.

"The variety of professions that our ex-IIT mates got into is amusing."

Prof. Shevgaonkar, presently deputy director of finance and external affairs and also the co-chairman of the IITBAA, said a few words on the heights that IIT Bombay has reached.

"IT is time for us to see what we've achieved in the last 50 years," he said.

He shared with the audience a few of his personal IIT experiences.

"IIT has become a brand by itself. It was one of the very few recognised institutes in our times. There was no path laid out for IIT-B.

"It grew organically, just the way human beings grow, stage after stage, achievement after achievement. However, now the time has changed and so has the environment.

"Initially there used to be interaction between the students and professors but now expansion is taking place instead. Therefore, we should take care and see that the student-professor relationship remains intact at the IITs.

"It's time now to think where we should go from here."

Shevgaonkar said much is said about what the IITians do before they join the institute and once they pass out.

"But it is never discussed what the students do while studying in the IITs. The training at the IITs should now become more research-oriented. Research should concentrate on environmental issues.

"In achieving this, the alumni play an important role. They should develop re-enforcing programmes to remind the students of their responsibilities as they achieve global recognition.

"However, one should remember that there will always be financial issues as our institute is still controlled by the government.

"We, the alumni, should be constantly associated with the IIT and thus help our institute achieve its goals", he signed off.

Padmini Prabhu in Bangalore
SHARE THIS STORY
Print this article