A debt fund operated by Kolkata-based Srei Infrastructure Finance on Monday said it has bought out the entire exposure of ICICI Bank, worth around Rs 430 crore (Rs 4.3 billion), in the financially troubled Kingfisher Airlines. 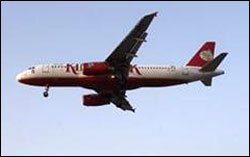 Srei Infra Finance group chief financial officer Sanjeev K Sancheti confirmed the deal to PTI over phone from Kolkata and described the asset as "a good buy as it is a fully secured debt."

When contacted, an ICICI Bank spokesperson said, "We have recovered the entire debt exposure of Rs 430 crore and currently we do not have any debt exposure to the Kingfisher Airlines."

The Bangalore-based carrier promoted by liquor baron Vijay Mallya has been struggling to operate for nearly a year now as it has been unable to raise even working capital from banks following its over Rs 7,500 crore (Rs 75 billion) loan turning an NPA from January.

The carrier has not been paying salaries to employees for the past five months, besides defaulting on tax payments as well as bills to its vendors.

It has been seeking fresh bank funding since last December apart from raising overseas funds.

Launched in May 2005, Kingfisher has not made a profit so far and has a total outstanding debt of Rs 7,500 crore and an equal amount in accumulated loss.

Around 200 pilots are on strike since yesterday, protesting non-payment of salary, which they have not received for the past five months, forcing the airline to cancel four flights today morning.

Kingfisher currently has only 15 aircraft flying, including eight ATRs, while 15 of its aircraft are grounded due to non-availability of spares on account of fund crunch.

Its lessors have already taken back 34 aircraft after the company allegedly defaulted on the rentals amounting to around Rs 1,000 crore (Rs 10 billion).