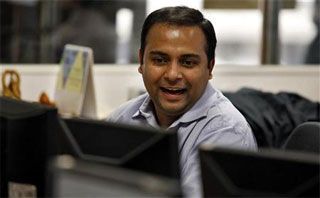 The benchmark share indices hit fresh record highs led by IT majors after encouraging comments by the US Federal Reserve Bank on the US economy and the government's announcement of FDI norms for real estate sector also boosted investor sentiment.

In the broader market, the BSE Mid-cap index ended up 0.7% and the Small-cap index gained 0.3%.

“Markets have been on an upward trajectory since the last few days on the back of renewed vigor shown by the government to initiate reforms, lower crude prices, lower inflation, supportive global cues & decent earnings. Though the Quantitative Easing ended, but the Federal Reserve keeping the "considerable period of time" stance for raising interest rates until it sees more improvement in the economy, cheered the markets. The rate sensitives like private banks, automobiles, NBFCs, Capital Goods have been the flavor as the participants now expect a rate cut sooner than later. The companies which have delivered stellar earnings & good quality mid caps are back on the radar.” sais Devang Mehta, Sr. VP & Head - Equity Advisory, Anand Rathi Financial Services.

Asian markets ended mixed with some recovering from their day's lows. Shares in Japan rose with the benchmark Nikkei rising 0.7% gain on the back of a weaker yen. Chinese shares firmed up and the Shanghai Composite ended up 0.8%. Straits Times ended up 0.3% while Hang Seng closed down 0.5%.

European shares pared early and were trading lower with CAC-40, DAX and FTSE down 0.5-0.8% each.

The BSE Realty index ended up 3.4% followed by IT, Consumer Durables, Oil and Gas indices.

Realty shares gained after the government has relaxed the norms for allowing foreign direct investment (FDI) in the construction development sector. It is expected the move will boost affordable housing projects and smart cities across the country. In the real estate pack Sobha Developers, HDIL, Prestige Estates, Oberoi Realty, DB Realty, Godrej Properties, DLF and Unitech ended up 2-8% each.

Shares of IT exporters which earn major part of their revenues from exports to the US firmed up post US Federal Reserve Bank's encouraging comments about the US economy. Infosys, TCS and Wipro were up 0.5-2.2% each.

Financial shares also firmed up after upbeat earnings from ICICI Bank which ended up 0.5%  after it reported a net profit of Rs 2,709 crore for the quarter ended September 30 which is higher by 15% as compared to the same period of the previous year. Axis Bank and HDFC Bank ended up 0.4-1% each.

Tech Mahindra ended up 3.5% after its reported encouraging July-September quarter earnings backed by strong growth in the US and better client mining. Revenues for the quarter under review were ahead of expectations at Rs 5,487 crore, up 13 per cent from same period last year, largely led by growth in the telecommunications and manufacturing segments.

Maruti Suzuki ended up 1.1% after reporting better-than-expected 28.8% year on year jump in net profit at Rs 863 crore for the second quarter ended September 2014 (Q2), on back of strong operational performance. The Oil and Gas shares also witnessed buying at lower levels after the recent correction. Reliance Industries, ONGC and GAIL were up 0.8-2.9% each.

ITC ended flat ahead of its July-September quarter earnings tomorrow.

Among other shares, YES Bank ended up 3.7% after reporting a better-than-expected 30% year on year jump in net profit at Rs 483 crore for the second quarter ended September 2014 (Q2), on back of healthy net interest income and lower provisioning.

Insecticides (India) ended up 8% after the board recommends the issue of bonus shares in the proportion of 1 bonus equity share for every 2 equity shares each held.

Astra Microwave Products surged 4% after reporting a more-than-double net profit at Rs 23.40 crore for the quarter ended September 2014 (Q2), on back of strong operational income.

Emami ended up 6% after reporting better than expected 16% year-on-year jump in net profit at Rs 92.76 crore for the quarter ended September 2014 (Q2), on back of higher sales.

Gati ended up 3% after reporting a 117% increase in its net profit to Rs 12.49 crore for the quarter ended September 2014, as compared with a profit of Rs 5.76 crore in the corresponding quarter previous year.