Markets snapped three day losing spell on account of value buying in the beaten down bluechips at attractive valuations.

Meanwhile, firm trend across the European peers and rise in the crude oil prices buoyed the sentiments.

"7,700 holds on Nifty, yet again and if the global markets support, we believe that the indices could find a short term support.

"The key sector to watch though is Banknifty. Today’s underperformance wouldn’t go too well, as it was led by underperformance from names which have shown strong rally in the last 2 months, such as Yesbank, Indusind Bank etc, said Kunal Bothra, Head-Advisory, LKP Securities.

"The 7700 CE strike has shown a strong Open Interest build up and we believe that till the time this level holds, traders could look at contrarian buy. The two key levels to watch are 7825 and 7650, which could act as a key intraday resistance and support for the index for tomorrow," he adds.

Oil prices climbed today with Brent breaking the level of $45 a barrel as raging wildfires threatened to cut Canadian output and a decline in US crude production also boosted the commodity.

European equities are gaining across the board following a rebound in the crude oil prices.

Hong Kong’s Hang Seng and Singapore’s Straits Times lost up to 0.5%. However, Japanese markets are shut today on account of a public holiday. 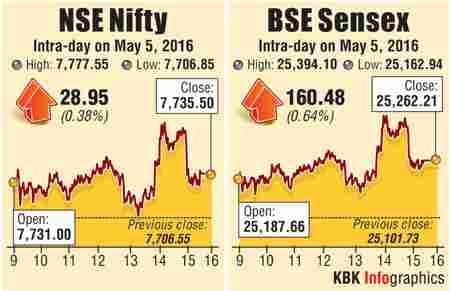 HDFC extended gains and emerged as the top Sensex gainer, up 3% after the housing finance major reported net profit of Rs 2,607 crore for the quarter ended March (Q4FY16), up 40% year-on-year (y-o-y).

Sun Pharma surged 1.3% amid reports that the pharma major is scouting for a partner to market 14 brands it acquired from Novartis in Japan. Among others, Lupin, Dr Reddys’ Lab and Cipla gained between 0.2%-1.5%.

Another prominent gainer was L&T ending 2% higher after Larsen & Toubro Infotech (L&T Infotech), IT services & solutions companies and a subsidiary of Larsen & Toubro, signed a multi-year contract with Elkjøp Nordic AS to provide end-to-end Infrastructure Management and Datacenter services.

V-Guard Industries shares jumped 20% after the company's net profit more than doubled to Rs 42 crore for the quarter ended March 31, 2016 (Q4FY16), on back of strong revenue growth.

The company had reported a profit of Rs 20 crore in the year ago quarter.

On the flip side, Adani Ports and Special Economic Zone (SEZ) slumped almost 15% in two trading session. The company reported lower than expected EBITDA margin for the quarter ended March 2016. The stock cracked 4.5%.

Hero Moto ended the session with marginal losses ahead of the Q4 numbers due today.

Idea Cellular slumped 5% on reports that the telecom company may spend $1.3 billion in adding data spectrum in upcoming auction around July. Among its peers Bharti Airtel down 1.6%.

Other notable losers include Hindalco, HUL, Bajaj Auto and RIL down between 0.5%-2%.

Hexaware Technologies fell 1% after the company posted marginal rise in consolidated net profit at Rs 84.2 crore in March quarter as compared to Rs 83.30 crore a year ago.