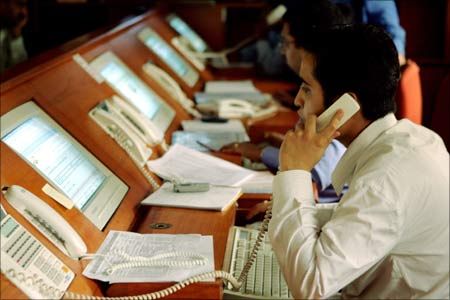 Markets have finished the first session of the week on a positive note as investors buy defensive stocks at lower and attractive valuations amid weakness in rupee.

Next set of Q4 FY16 earnings, progress of monsoon along with election poll outcome will dictate the trend of markets this week.

“Reports of delay in monsoons, weak results posted by PSU banks and uptick in WPI weighed on investor sentiment.

"However, buying in defensive shares has capped further downside. Meanwhile, the Nifty could see levels of 8,200/8,350 if it breaches 7,850/7,920 levels while a breakdown below 7,860 could lead to a correction,” said AK Prabhakar head-research, IDBI Capital.

Wholesale prices rose by 0.34% in April after seventeen consecutive months of decline, against -0.85% in March. The wholesale price index had recorded deflation for a complete year in 1975-76.

Furthermore, the onset of the southwest monsoon over Kerala is likely to be delayed from the normal date of June 1. This update further hurt the investor sentiments.

Globally, the Asian stocks finished the day on a firm note shrugging off the gloom from soft Chinese data amid a strong dollar. Hang Seng, Nikkei and Shanghai closed up between 0.3%-1%. However, European equities took a hit in today’s trade with FTSE 100 and CAC 40 trading lower between 0.3%-1%. Meanwhile, markets in Germany are closed today.

Cigarette maker ITC ended 2% higher ahead of the quarter results due this week. Its peer HUL ended over 1.5% higher.

Depreciation of rupee helped the defensive stocks. In the technology pack, TCS, Wipro and Infosys climbed between 0.3%-1.5%.

On the flip side, SBI lost nearly 5% ahead of its March quarter earnings on 27 May.

Meanwhile, Punjab National Bank shed over 4% ahead of the earnings this week.

Among other banking stocks, Axis Bank and ICICI Bank declined between 1.5%-2.5%.

Public sector banks (PSBs) closed lower by up to 9% on the bourses after reporting a disappointing set of numbers for the quarter ended March 31, 2016 (Q4F16).

State-run engineering firm BHEL bagged a Rs 1,600 crore order from a joint-venture company of NTPC and SAIL to set up a coal-based thermal power project in Odisha. The stock closed 1% lower.