Markets finished the session on a tepid note as participants turned cautious after sharp gains in the previous sessions and ahead of the June quarter earnings of IT majors TCS and Infosys this week.

In the broader market, both the BSE Midcap and Smallcap indices, down nearly 1%, underperformed the front-liners.

"Markets still remain in an overall uptrend with bullish patterns on both the daily and weekly candles.

"We remain upbeat at the current juncture and would maintain a long outlook with short term target above 8,700," said Nikhil Kamath, Co-Founder & Director, Zerodha.

In the macro-economic front, industrial production, measured through the Index of Industrial Production, in volume terms continued to show signs of weakness even as it recovered to grow 1.2% in May, after a 0.8% contraction in the previous month, data released on Tuesday showed.

However, the Consumer Price Index (CPI)-based inflation revealed a contrasting picture in urban and rural areas in June. 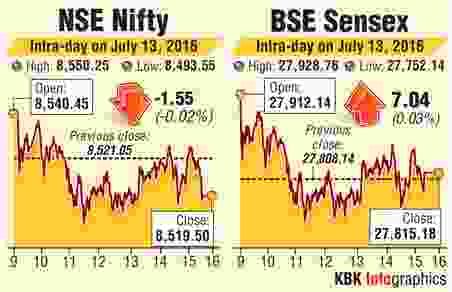 Among overseas markets, European stocks edged higher in early trade and most Asian stocks rose, adding to the gains in the past few sessions amid improved risk appetite following the positive lead overnight from Wall Street.

Oil prices surged 5% on Tuesday, the biggest daily gain since April, as investors' covering of short positions and a technical rebound helped lift the market from two-month lows.

Back home, rupee firmed up 7 paise to 67.11 against the dollar at the forex market on increased selling of the US currency by banks and exporters amid positive economic data.

Shares of Cairn India and Vedanta rallied upto 6%, extending recent upmove on media reports that Cairn Energy PLC has sought $5.6 billion in compensation from the Indian government for raising a retrospective tax demand of Rs 29,047 crore.

Shares of ONGC and Oil India surged over 2% each on reports the government is likely to give a nod to hike kerosene prices by Re 0.25 a litre per month till April 2017.

Infosys and TCS gained around 1% ahead of cautious ahead of their June quarter earnings which will come out on July 14 and July 15, respectively.

BHEL surged over 3% on reports Bangladesh-India Friendship Power Company inked the deal with the company for constructing the super thermal plant at Bangladesh's southwestern Rampal near the Sundarbans.

On the losing side, Maruti Suzuki India fell over 1% as Japanese yen strengthened against the dollar.

Shares of power generation and power distribution companies edged lower in trades today on account of profit booking. The BSE Power index had outperformed the market over the past one month till 12 July 2016, rising 5.16% compared with the Sensex's 4.4% rise.

Power Grid slipped by over 3%.

Tata Motors fell almost 1%. The company announced that it intends to raise Rs 400 crore from the issue of the third series of its non-convertible debentures (NCDs).

Among other shares, Financial Technologies India was down over 6% after Jignesh Shah, the founder was arrested by the Enforcement Directorate (ED) under the Prevention of Money Laundering Act for non-cooperation in the investigation.

This follows a fresh complaint by Member of Parliament Kirit Somaiya and reportedly a presentation made by the NSEL Investors Forum to the ED.

NBCC (India) tumbled over 10% on reports the Union Cabinet has approved stake sale in the company.

Indiabulls group stocks corrected on news of IT officials raiding the company's offices.

Shares of Jaiprakash Power Ventures rose over 4% after the company said that its board will meet on 18 July 2016 to consider the proposal to hive-off and transfer Jaypee Bina thermal power plant.