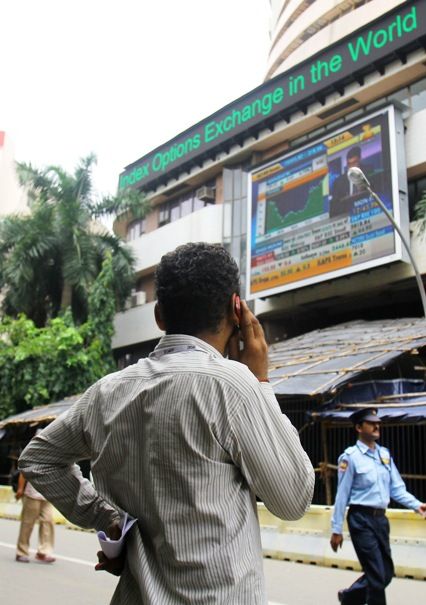 Markets ended marginally higher on Thursday led by gains in bank shares after Finance Minister Arun Jaitley said that the government was working towards bringing in more professionalism in the functioning of banks and improving risk management, amid the backdrop of the recent scams in some public sector banks.

Further, steel shares came under pressure after the government hiked royalty on iron and bauxite.

The broader markets outperformed the benchmark indices- BSE Midcap and Smallcap indices gained between 0.3-0.5 per cent.

Meanwhile, foreign portfolio investors (FPIs) bought shares worth a net Rs 251.36 crore on Wednesday, as per provisional data from the stock exchanges.

Some reassuring data from Germany eased pressure on the struggling euro on Thursday after speculation of an earlier rate rise from the Federal Reserve had pushed the dollar to an 11-month high.

Share markets had been feeling flat following a disappointing survey on Chinese manufacturing overnight but they too got a lift from the news that Germany's private sector grew for a 16th month running in August.

Asia markets had been soured after the HSBC/Markit Flash China Manufacturing Purchasing Managers' Index (PMI) fell to 50.3 in August from July's 18-month high of 51.7, badly missing a Reuters forecast of 51.5.

Investors reacted by selling the Australian dollar, often a used as a liquid proxy for bets on China, while the CSI300 of the leading Shanghai and Shenzhen A-share listings shed 0.9 per cent. Tokyo's Topix ended up 0.9 per cent, as did the Nikkei.

The rupee is trading at 60.71 versus its close of 60.61/62 on Wednesday. The US dollar is trading at 11-month highs against a basket of major currencies after minutes of the Federal Reserve's July meeting sounded slightly hawkish.

BSE Consumer Durables index surged by over 3 per cent followed by counters like Banks, Capital Goods, Auto and Healthcare, all gaining by nearly 1 per cent each.

However, BSE Metal, Realty and Power indices declined by 1 per cent each.

The BSE Consumer Durables Index was the top gainer among the sectoral indices up over 3 per cent at 9,103 after touching an intra-day high of 9,169.

After the sharp rally in other sectors such as auto, bank, pharma, capital goods and IT investors are now turning focus to customer discretionary shares.

Titan was the top gainer up 6 per cent after a foreign brokerage upgraded the stock to overweight and raised the target price.

The company expects improvement in margins led by the jewellery business under the Tanishq brand.

Other gainers in the Consumer Durables index included, Bajaj Electricals, VIP Industries, Rajesh Exports, Blue Star up 2-3 per cent each.

Auto shares extended gains on hopes that sales growth in the forthcoming months ahead of the season is likely to be encouraging.

Among banks, SBI, ICICI Bank, Axis Bank and ICICI Bank gained between 0.3-2.5 per cent. Finance Minister Arun Jaitley on Thursday said incidents of unfair practices in public sector banks were disturbing, but expressed hope that such cases were not large in number.

Axis Bank ended higher by nearly 2 per cent after the bank's board approved raising funds through private placement.

Shares of metal companies were trading lower up to 2 per cent in otherwise positive market after the Union Cabinet on Wednesday decided to raise the mining royalty rates. This should lead to an increase in input prices for all mineral-based industry.

Tata Steel, Sesa Sterlite, JSW Steel, Steel Authority of India (SAIL) and NMDC were down 1-2 per cent on the National Stock Exchange (NSE).

Shares of shipping companies rallied up to 10 per cent on the bourses after the Baltic Dry Index hit four-month high on Wednesday.

SCI, Mercator, G E Shipping and Chowgule Steamships were up 1-9 per cent on the BSE. While ABG Shipyard (up 10 per cent at Rs 255) and Bharati Shipyard (up 5 per cent to Rs 35) also rallied by over 5 per cent each.

Sterlite Technologies were locked in 5 per cent upper circuit at Rs 60.35 on expectations that the integrated optical fibre company would be one of the key beneficiaries of the Digital India plan.