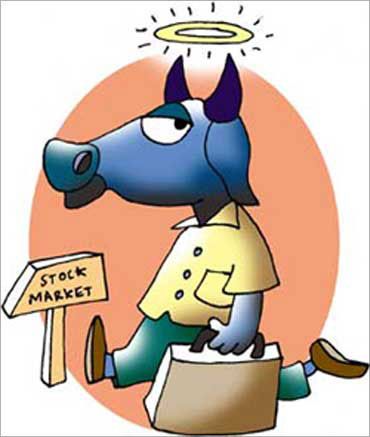 Markets ended flat with negative bias, amid weak European cues, after reports suggested that some US Federal Reserve officials are in favour of a rate hike soon while gains in State Bank of India capped further downside.

In the broader market, the BSE Midcap and Smallcap indices ended up 0.5% each. Market breadth ended firm with 1471 gainers and 1238 losers on the BSE. Meanwhile, the Nifty Bank ended at fresh 17-month closing high.

"Market turned volatile towards closing and ended marginally lower due to weak opening in the European market which made investors cautious.

However, we have seen value buying in select high quality stocks in the mid & small caps due to the marginal consolidation in the last one week," said Vinod Nair, Head of Fundamental Research at Geojit BNP Paribas Financial Services.

Foreign institutional investors were net buyers in equities worth Rs 162 crore on Thursday, as per provisional stock exchange data.

European stocks edged lower on Friday after oil prices retreated while talk of rate hike by the US Federal Reserve also weighed on sentiment. The CAC-40, DAX and FTSE were down 0.2%-0.7% each.

SBI was the top Sensex gainer over 4% after the state-owned banking major approved the share swap ratios for the merger of five associate banks and Bharatiya Mahila Bank with itself.

Likewise, shareholders of SBM will also get 22 shares in SBI for every 10 shares held by them in SBM.

In the capital goods space, BHEL ended up over 1% after the company recently won an EPC Order for supply of 30 MW Solar Photovoltaic Power Plants.

L&T ended higher after the company recently said it has been identified as implementation partner to convert Nagpur into the first large-scale integrated Smart City as per a Letter of Intent by the Government of Maharashtra.

Private lenders which had gained in the previous session ended lower on profit taking. HDFC Bank and Axis Bank ended down 0.3%-0.7% each.

Reports suggest that the state-owned firm is showing reluctance to declare its non-operational coal-mines as abandoned, preventing the authorities from using the space for disposing fly ash in Chhattisgarh.

TCS ended down over 1% on profit taking after gains in the previous session post a strategic deal with a leading US-based airline JetBlue.

Shipping Corporation of India closed over 5% lower after the company reported a sharp 73% year on year (YoY) decline in net profit at Rs 56 crore for the quarter ended June 30, 2016 (Q1FY17), due to lower operational income.

An illustration by Uttam Ghosh/Rediff.com