Benchmark share indices extended gains on Tuesday led by a rally in auto and agri-based stocks amid above normal monsoon forecast.

In the broader market, the BSE Midcap and Smallcap indices ended up nearly 1% each.

Market breadth remained positive with 1511 gainers and 1111 losers on the BSE.

"The key trigger for the markets has been the forecast of above normal monsoon this year.

Skymet, a non-government weather forecaster, said on Monday that the year's southwest monsoon should be slightly ‘above normal’, at 105 per cent of the Long Period Average.

Rainfall within 96-104 per cent of the LPA is considered normal and anything above as 'above normal'. LPA is 889 mm, the average rain the country got in the 50 years from 1951.

Meanwhile, market will remain closed on Thursday and Friday on account of Baba Saheb Ambedkar Jayanti and Ram Navami, respectively.

Tata Motors ended up 2% on robust JLR sales. JLR's volumes grew 29 per cent year-on-year, with China sales up 43 per cent (about half came from the China joint venture).

Two-wheeler majors Hero MotoCorp, TVS Motor and Bajaj Auto were up 0.6%-2% each.

Maruti Suzuki ended nearly 3% up on renewed buying interest after the sharp correction in the previous few sessions on concerns that the rising yen would hurt margins.

Hero MotoCorp gained over 2%. The two-wheeler major has submitted plans to begin production at its proposed plant in Chittoor district in the state of Andhra Pradesh.

Dr Reddy’s Labs ended up 1.6%. The drug major'ss buyback offer is to commence on April 18. 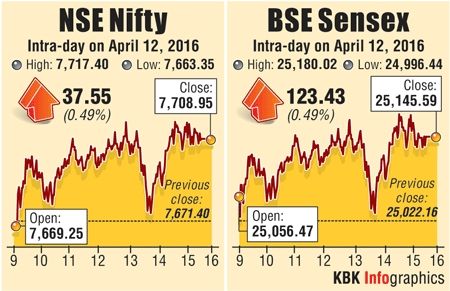 Among others, shares of sugar producers gained up to 10% in otherwise firm market on profit booking after sharp gains in the previous sessions. Oudh Sugar Mills, Uttam Sugar Mills, Kesar Enterprises, Upper Ganges Sugar, Dwarikesh Sugar, Simbhaoli Sugar, Dhampur Sugar and Rajshree Sugars were down 5%-8% each.

In the fertiliser pack, Coromandel International, FACT. RCF and Chambal Fertilisers gained 2.5%-3.5% each. Tractor makers VST Tillers and Escorts ended up 10%-11% each.

TTK Prestige rallied nearly 8% on the BSE after the company engaged in houseware business said it will acquire a UK-based kitchenware company Horwood Homewares for an undisclosed sum.

Nestle India surged 4% on the BSE after Maggi noodles has passed all safety tests directed by the Supreme Court and the National Consumer Disputes Redressal Commission.

Inox wind ended up 4% after the company said it has received two contracts for a capacity of 70MW with the Adani Green Energy Ltd, a wholly-owned subsidiary of Adani Enterprises Ltd and part of the Adani Group, the release added.

Goa Carbon surged 17% after consolidated net loss for the year ended March 31, 2016 declined to Rs 4.81 crore compared with a loss of Rs 8.89 crore in the last fiscal.