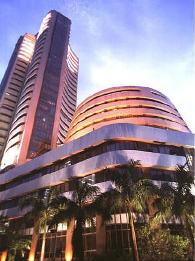 Snapping a four-day rally, the BSE benchmark Sensex on Friday fell from six-week high by losing 120 points dragged down by RIL, ICICI Bank and TCS amid a weak global trend.

Similarly, the wide-based National Stock Exchange index Nifty fell by 44.85 points, or 0.76 per cent, to 5,871.45 led by two most heavy weight Reliance Industries and Infosys.

Jindal Steel fell by 4.29 per cent to Rs 314.70 after the company's consolidated net profit fell by nearly 35 per cent for the quarter ended March 31.

However, auto stocks gained as Maruti Suzuki rose by 5.57 per cent to Rs 1,673.45 on higher earnings and saved the market from any major fall.