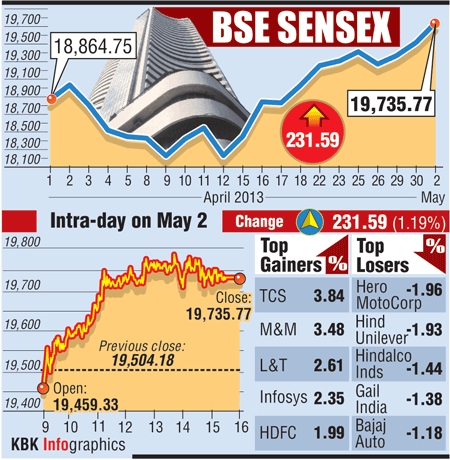 Markets ended higher this Thursday with 50-share Nifty closing near key resistance level of 6,000 on back of buying in rate-sensitive sectors such as banks, real-estate.

Risk appetite improved on hopes of aggressive policy action by the Reserve Bank of India in its credit policy tomorrow after headline inflation to over 3-year low in March.

The rate-cut optimism grew stronger after global commodity prices dropped. Lower crude oil prices have the potential to shave off 50 basis points (bps) from the headline inflation print during the year.

Barclays expects CAD to moderate to a little over three per cent of gross domestic product over the next three years, much worse than the long-term average of 1.5 per cent.

Global risk appetite was, however, frail after weak set of economic data from US and China, the two biggest economies of the world.

Reports on Wednesday showed U.S. companies added fewer workers than forecast in April and the Institute for Supply Management’s factory index fell to 50.7 in April from 51.3 in March.

Meanwhile, HSBC Purchasing Managers' Index (PMI) dropped to 50.4 in April from March's 51.6 and was largely in line with a flash reading last week of 50.5.

Back home, all the key sectoral indices gained with IT, realty, banks, capital goods topping the chart on the BSE.

The gainers on the Sensex included, TCS and Infosys rising 4% and 2% respectively , HDFC and SBI gained over 2% each, Larsen & Toubro rose 2.6% on the BSE. 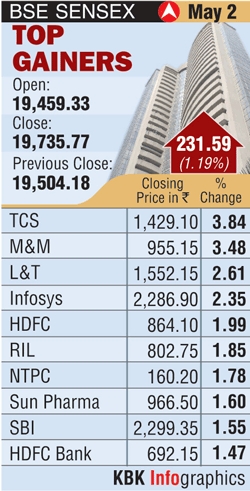 Tata Motors dropped 1% after registering a 14.8% decline in total vehicle sold in the month of April 2013.

Syndicate Bank surged 8% to Rs 129.45 on reporting a better-than-expected 92% year-on-year (yoy) jumped in net profit at Rs 592 crore for the quarter ended March 2013 (Q4) due to lower provisioning for bad loans and tax expenses.

The broader markets gained with mid-caps and small-caps rising nearly 0.7% on the BSE. The market breadth was positive.