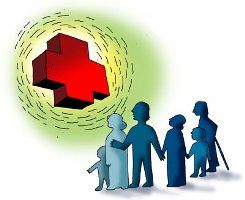 India's economic growth will not be sustainable unless there is heightened investment on the country's healthcare that would require injection of $3 trillion in the next 10 years to have an overall ‘ripple effect’ on the economy, according to a report.

As per a white paper, 'Aarogya Bharat 2025', India Healthcare Roadmap for next 10 years launched at NATHEALTH event on Tuesday said the country is healthier now than ever before, but its ‘continued economic progress is threatened by the country's under-served and under-consumed healthcare system’.

"If India is serious about transforming its healthcare system -- an evolution that will require $3 trillion in spending -- it must increase its investment in the sector to about 2.5-3 per cent of the gross domestic product, in the next 10 years, which will have an overall ripple effect on the economy," it added.

Commenting on the findings, NATHEALTH President Shivinder Mohan Singh said: "At 1.3 per cent of the gross domestic product, public spending on healthcare in India is among the lowest across the developing countries and affects the poor and inaccessible rural areas the most."

"Healthcare spending in India needs to go to 6 per cent of the GDP of which the government's investment in the sector should go to 3 per cent.

“There is also need to for basic health insurance to all," Head of Bain's healthcare practice in Asia-Pacific Karan Singh told PTI.

A paradigm shift from curative to prevention and wellness is also needed, he added.

"The sole responsibility does not lie with the government. The private players in the healthcare industry have a significant role to play to bridge the demand-supply gap and to build a healthier India," NATHEALTH Founder Chairman Prathap C Reddy said.

The government should also help by giving priority status to the sector, he added.

The healthcare body also inked a memorandum of understanding with Indian Medical Association to jointly work on ethics in healthcare with leaders of NATHEALTH taking a pledge to follow a code of ethics.