The biggest global alcohol companies are sizing up buyout and tie-up opportunities in China, India, South Korea and Vietnam, keen to profit from a $258 billion Asian market that is growing twice as fast as the rest of the world. 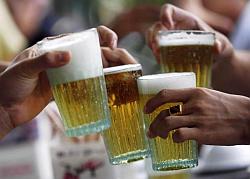 Like many other sectors, the global drinks industry is stepping up its Asian presence to offset sluggish growth at home.

"Everybody wants a slice of Asia," said Deepa D'Souza, a consultant with global market research firm Mintel in Mumbai.

"The global companies who are present there want to expand further and further in markets like China," she added. "The problem is there are not enough suitable assets available and so there is a race to pick up whatever is around and there will be more of the takeover battles we are seeing now."

After a two-month battle last year, Dutch brewer HeinekenNV finally got control of Asia Pacific Breweries Ltd in a $6.4 billion deal. That translated into a multiple of 35 times earnings, amongst the richest paid for Asian beer acquisitions and a sign that global companies are willing to bid up for Asian growth.

World No. 1 Diageo Plc's plan to buy a majority stake in India's United Spirits may spur more deals in that country's competitive spirits segment in the next couple of years, analysts said. The race for partners in India has already begun.

"We have signed a bottling partnership with Pernod last year and are open to strategic partnerships," said the official, who declined to be named because he was not authorised to discuss internal negotiations. "Discussions are on with Pernod."

Pernod confirmed that it had a bottling deal with Tilaknagar, but declined to comment on whether it was seeking a strategic partnership.

Tie-Up, Not Buy Up

Deals in China's spirits segment will be largely limited to distribution tie-ups, although bankers say some acquisitions are possible as the industry consolidates.

The top five brewers in China control about 60 percent of the domestic beer market, compared with South Korea where the top two hold about 90 percent.

"What matters in China is to have a successful joint venture partner and use that platform to sell not only their foreign brands but also help lift the quality of domestic brands and spruce up distribution," said one Hong Kong-based mergers and acquisitions banker who advises brewers. He declined to be named because he was not authorised to speak publicly about the matter.

China's beer market grew by 29 percent in volume terms between 2007 and 2011, and Mintel predicts cumulative growth of 47.5

percent over the next five years.

Buying a piece of that growth won't come cheap. Chinese alcohol companies boast valuations that are three times richer than those in Western countries, with deals closing at multiples of up to 50 times earnings, said Andrew Holland, an analyst with Societe Generale in London.

"It is bit of a puzzle because the profitability of the Chinese beer industry is not high. But a lot of Western brewers see the size of the market, see the growth in it and ignore usual financial discipline in order to build their presence there," Holland said.

Kingway Brewery's planned sale of some China business has been delayed after some buyers baulked at the high price. Kingway is still in talks with CR Snow for a deal, sources familiar with the matter told Reuters, after discussions with Beijing Yanjing broke off last year. CR Snow is a joint venture between China Resources and SABMiller PLC, the world's second biggest brewer.

Vincent Tse, a spokesman for China Resources, said the company does not comment on speculation. Beijing Yanjing does not currently have any deals with foreign brewers, said a company official who declined to be named because she was not authorised to speak to the media. Officials from Kingway were not immediately available for comment and CR Snow did not immediately respond to a request for comment.

The potential sale of South Korea's Oriental Brewery, owned by KKR and Affinity Equity Partners, is among the large deals expected this year, bankers said.

Anheuser-Busch InBev SA sold Oriental Brewery three years ago to cut debt and it has the first right of refusal to buy back the company.

Oriental Brewery could attract interest from Japanese and global brewers if there is a full-fledged auction, with some estimates putting the price tag upwards of $3 billion based on its $330 million EBITDA, according to sources with knowledge of OB's financials.

In Vietnam, the government's planned sale of a 20 percent stake in Sabeco is expected this year, according to bankers.

In India, partnerships are the preferred approach because most of the drinks companies are privately owned by individuals who do not want to cede control.

"The idea always is to bring in a strategic partner because foreign firms eventually look for control," said Ajit Sirsat, deputy general manager, corporate finance at Tilaknagar. "Even the Diageo-United Spirits deal would not have happened if the owner did not face financial stress."

Allied Blenders and Distributors is planning an initial public offering in the next two years, having turned down approaches from foreign companies because their intent is to gain control, chief executive Deepak Roy said.

The company is in talks with private equity players to raise Rs 2.5 billion to meet its immediate funding requirements, he said.