Haldia caught in a political crossfire 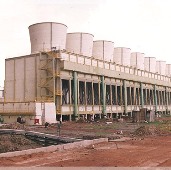 Haldia, West Bengal's biggest industrial hub, has started feeling the heat of the political crossfire in the state.

The Tamluk Lok Sabha constituency (which includes the Assembly constituencies of Haldia and Nandigram) was wrested by the Trinamool Congress from the Communist Party of India-Marxist in the last elections by a handsome margin of 120,000 votes. As a consequence, Lakshman Seth of the Left, who ended up on the losing side, had to give up the chairmanship of the Haldia Development Authority, which facilitates planning, land acquisition, social welfare, among various other activities.

Industry at Haldia, a major port and commercial hub, has been caught in the middle of this power transition. Consider this: RPG's power utility, CESC, is unable to erect evacuation towers due to land issues and the third phase of its ongoing expansion of 250 Mw has already been delayed by seven-eight months.

For its Haldia project, the delay in a 40-acre land acquisition has held up the financial closure for the first phase of 600 Mw, which is a part of the greenfield 2,000 Mw project.

The original plan was that the land would be acquired by the government, but the company is now going for direct purchase because of the inordinate delay.

Apeejay Infra-Logistics Pvt Ltd, a 50:50 joint venture between the Apeejay Surrendra group and Eredene Capital Plc, planned to set up a 90-acre logistics hub at Haldia. The land has been acquired by the government, but after work began on the boundary wall, the land-losers, supported by the Trinamool Congress, started demanding more compensation.

It's not land-related issues alone. The muscle-flexing by the CPI-M and the Trinamool Congress-affiliated trade unions at the existing units have meant labour trouble at the 388 industrial units. Both the trade unions are suddenly eager to take up the cause of contractual labourers and demanding wage hikes.

H M Nerurkar, executive director, India and South East Asia operations of Tata Steel, says there are some issues. "It's not bothersome now, but we are keeping a watch." Tata Steel's 100 per cent subsidiary, Hooghly Met Coke & Power Company, has a 1.6-million-tonne coke project at Haldia.

Haldia Petrochemicals sources say the company has been facing labour-related issues every now and then.

Though companies are cagey to talk about it openly, the problems have been brought to the notice of all stakeholders -- Trinamool Congress, the state government and the Confederation of Indian Industry.

Saugat Mukherjee, regional director of CII eastern region, says: "Our industry members have brought to our notice some concerns and we have taken it up with the labour department in the government. We plan to hold some interactions with various stakeholders."

West Bengal commerce and industry minister Nirupam Sen says, "No company has directly approached us, but I am aware of the problems that the industry is facing at Haldia."