The Biden administration has announced that it is delaying the H-1B policy of the previous Trump administration on allocation of the popular foreign work visas by continuing with the lottery system until December 31, 2021, to give the immigration agency more time to develop, test and implement the modifications to the registration system. 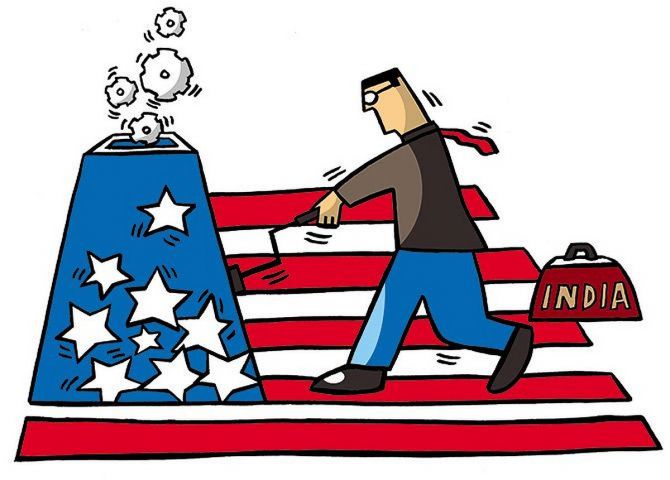 On January 7, the US Citizenship and Immigration Services (USCIS) announced to do away with the traditional lottery system in deciding the successful applicants for the H-1B visas.

The USCIS had said it would prioritise wages to protect the economic interests of American workers, and better ensure that the most highly skilled foreign workers benefit from the temporary employment programme.

In a statement on Thursday, the USCIS said that it is delaying the rule's effective date until December 31, 2021.

"To give USCIS more time to develop, test, and implement the modifications to the H-1B registration system and selection process, DHS is delaying the effective date of this final rule from March 9, 2021, to December 31, 2021," it said.

This is because it will not have adequate time to complete system development, thoroughly test the modifications, train staff and conduct public outreach needed to ensure an effective and orderly implementation of the H1B Selection Final Rule by the time the initial registration period will be open for the upcoming fiscal year (FY) 2022 H-1B cap season, the USCIS said.

The delay will also provide more time for the USCIS to train staff and perform public outreach as well as give stakeholders time to adjust to the new rule.

For the upcoming H-1B cap season, the USCIS will apply the current regulations (random selection) to any registration period that takes place before December 31, 2021, the statement said.

On January 7, the USCIS argued that doing away with the lottery system and replacing that with a merit-based and wage-based system will incentivise employers to either offer higher salaries or petition for higher-skilled position or both.

This will further establish a more certain plan for businesses to get personnel and remain globally competitive.

A formal federal notification was issued on January 8.

“The current H-1B random selection process makes it difficult for businesses to plan their hiring, fails to leverage the programme to compete for the best and brightest international workforce, and has predominantly resulted in the annual influx of foreign labour placed in low-wage positions at the expense of US workers,” Joseph Edlow, the USCIS Deputy Director for Policy, had said.

It can also issue another 20,000 H-1B visas to foreign students who have completed higher studies from a US university in Science, Technology, Engineering and Mathematics (STEM) subjects.

A formal notification is scheduled to be published in the Federal Register on February 8.

“During the delay, while USCIS works through the issues associated with implementation, Department of Homeland Security (DHS) leadership will also evaluate the January 8th rule and its associated policies, as is typical of agencies at the beginning of a new administration,” said the federal notification to be published on February 8.

The DHS wants to ensure the orderly and efficient administration of the H-1B numerical allocations and wants to avoid disruption to the regulated public by affording itself sufficient time to fully modify and thoroughly test the changes to the H-1B registration system, minimise technical risks that result from a compressed testing schedule, and provide the regulated public enough time to become familiar with those changes to facilitate full compliance with the new regulatory requirements.

On December 31 last year, then president Donald Trump extended a freeze on the most sought-after H-1B visas along with other types of foreign work visas by three months to March 31, affecting a large number of Indian IT professionals who were issued visas by the US government for the fiscal year 2021.