The old India was economically fragmented. New India will create one tax, one market, one nation, said Jaitley. 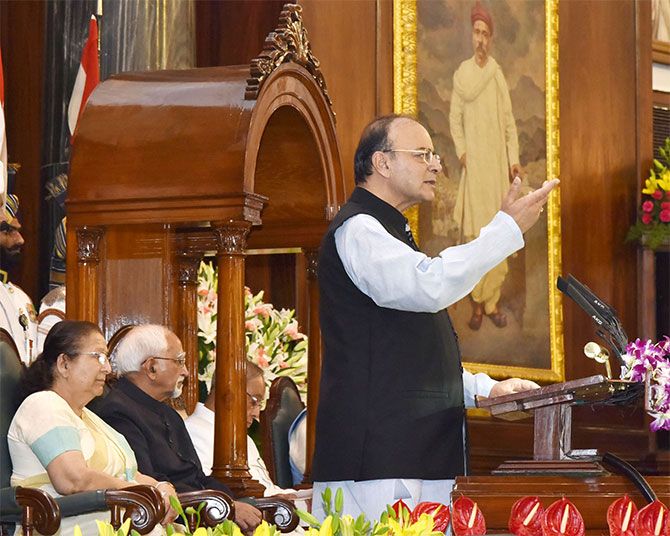 Addressing the midnight launch event of the GST in the Central Hall of Parliament, Jaitley said implementation of the landmark unified tax should be seen as the beginning of a new journey that will expand the country's economic horizon.

He further said that 17 transaction taxes in states and centre and 23 cesses would be subsumed in GST. An assessee will have to file only one return.

"Inflation will come down, tax avoidance will be difficult, India's GDP will be benefited and extra resources will be used for welfare of poor and weaker section," Jaitley said.

India is making history with the launch of GST, which is the biggest and most ambitious tax and economic reform in its history, the finance minister said.

"The old India was economically fragmented. New India will create one tax, one market, one nation. It will be in India where Centre and states work together towards the common goal of shared prosperity," Jaitley said.

Terming GST as an important achievement for the country, he said not only will India write a new destiny, the new tax regime would also strengthen federalism.

"The Constitution says India is a union of states. The union is strong if both Centre and states are strong. That is the real meaning of cooperative federalism.

"While enacting the GST, neither the states nor Centre gave up their sovereignty. They have pooled their sovereignty to make joint decisions in indirect taxation," the finance minister said.

In a large and complex federal system of multi-party democracy with Centre and 29 states and 2 UTs, Jaitley said India has implemented a constitutional amendment and brought in a large tax reform.

"We have done this at a time when world is facing a slow growth, isolationism and lack of structural reforms. With the GST, India has showed that these forces can be overcome through display of inclusion, openness and boldness," he said.

He appreciated the efforts of all members of parliament, state finance ministers and officials in making GST a reality when many had expressed doubts whether it could be implemented from July 1.

Jaitley also recalled the initiatives taken by his predecessors, including the then Finance Minister Pranab Mukherjee.

"All decisions of GST Council were taken unanimously...We did not want to burden common man and weaker section," Jaitley said.