States may face a GST compensation shortfall of Rs 3 lakh crore in the next financial year, a situation that will force them to borrow more from the markets, says a report. 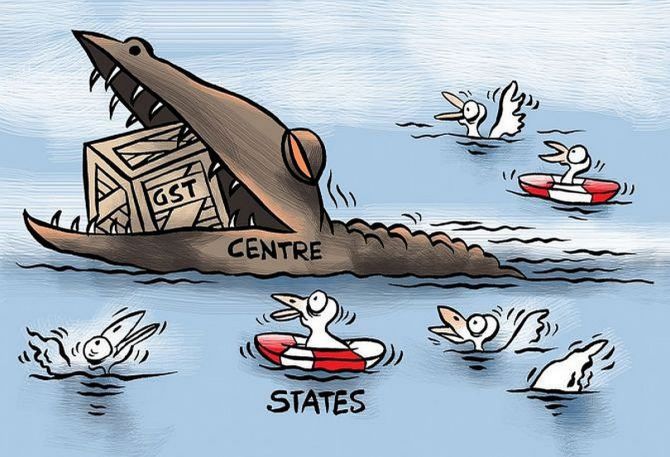 The states may face a shortfall of Rs 2.7-3 lakh crore as Goods and Services Tax (GST) compensation from the Centre next fiscal.

Out of that amount, the shortfall from cess collections will be at Rs 1.6-2 lakh crore, according to an Icra report released on Monday.

In FY21, the states were facing a shortfall of Rs 1.1 lakh crore in GST compensation from the Centre but over 90 per cent of that amount has been cleared now.

According to the rating agency, the shortfall will force states to borrow at least Rs 2.2 lakh crore more from the market, which means that they will have to utilise as much as 90 per cent of their enhanced borrowing limits in FY22.

"Based on the Centre's GDP estimate for FY22, we project the enhanced borrowing of 1 per cent of Gross State Domestic Product (GSDP) or Rs 2.2 lakh crore by the states as we estimate a shortfall in GST compensation from the Centre to the tune Rs 1.6-2 lakh crore, taking the overall GST compensation shortfall to Rs 2.7-3 lakh crore in FY22," Jayanta Roy, group head of corporate sector rating at Icra, said.

The 15th Finance Commission has recommended that the normal limit for net borrowings of states be fixed at 4 per cent of GSDP in FY22, higher than the base borrowing limit of 3 per cent.

The commission has also recommended an additional borrowing of 0.5 per cent for the states during FY22-25, if they completed some conditions linked to power sector reforms.

The Centre has estimated the maximum power sector-related additional borrowings at Rs 1.1 lakh crore in FY22.

This along with any carried-forward borrowing of FY21, which we estimate at another Rs 1.1 lakh crore, will provide considerable space to the states to spend more on capital expenditure in FY22, he said.

The agency has estimated the states' projected revenues at Rs 8.7 lakh crore next fiscal, which is 14 per cent higher than Rs 7.7 lakh crore in FY21.

The numbers are based on an estimate by the agency for all the 31 states and the Union Territories on a base case scenario of 23 per cent growth in GST collection by the states, which is in line with the Central estimate as well.

Based on this, the agency expects the SGST collections by all the 31 states and UTs at Rs 5.7 lakh crore in FY22.

The gap between the estimated projected revenue and SGST collections is pegged at Rs 3 lakh crore.

So far, the Centre has not proposed a mechanism to fund the possible shortfall in GST compensation to the states.

Based on the State Development Loans issuance till March 9 and borrowings notified/ indicated for the remaining three weeks, the agency expects the net issuance of SDLs in FY21 at Rs 6.7 lakh crore or 71 per cent of their aggregate net borrowing limit of Rs 9.5 lakh crore for this fiscal.

This means the states can borrow an additional Rs 2.8 lakh crore during the reminder of the outgoing fiscal but it seems that some state may choose to carry forward a portion of the unutilised borrowings to FY22.