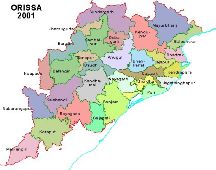 Faced with problems of acquiring land for various projects in the state, the Orissa government has decided to create exclusive land banks for industrial purpose.

"I have asked the district collectors to reserve land for major industries and ancillaries in their respective districts", state's revenue minister S N Patro said on Friday.

He was speaking in the conference of collectors of southern revenue division, where several senior officers of different departments and collectors of 10 southern districts were present.

The land bank will remove the hurdles in acquisition of land by the industries, he added.

Almost all the major industrial houses, which have signed memoranda of understanding with the state government for setting up of their projects in the state, are now facing problems as the affected people are unwilling to vacate the identified land.

"I have also asked the collectors to solve the land acquisition problem through discussion with the affected persons and giving them appropriate compensation under the resettlement and rehabilitation policy formulated by the state government in 2006', the minister said.