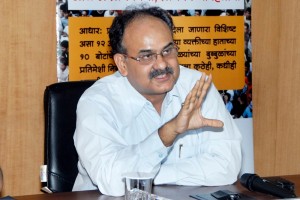 A doctorate in computer science from University of Minnesota Minneapolis of US, Pandey is a Maharashtra cadre IAS officer of 1984 batch.

He has been involved with UIDAI established under the Aadhaar Act and implementation of Aadhaar since September 2010.

It was during his tenure as the UIDAI head when Aadhaar allocation crossed 100 crore (Rs 1 billion) and a new Aadhaar Bill was passed.

As per the Aadhaar (Targeted Delivery of Financial and other Subsidies, Benefits and Services) Act, 2016, the UID Authority shall consist of a chairperson, appointed part-time or full-time, two part-time members, and the chief executive officer who shall be member-secretary of the Authority, to be appointed by the central government.

". . . a chief executive officer of the Authority, not below the rank of additional secretary to the Government of India, is to be appointed by the central government," the Act states.