Give proper treatment to our companies in India: Russian DPM

Russia pressed for "proper treatment" of its companies operating in India, voicing concern over problems faced by its Sistema company which invested about USD three billion in Indian telecom sector but lost its licence under the Supreme Court in the 2G case. 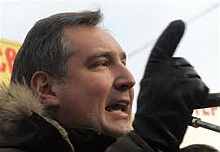 Russian Deputy Prime Minister Dmitry Rogozin made abundantly clear the unhappiness of his country in the matter during a joint press event with External Affairs Minister S M Krishna when he emphasised that it was a "sensitive" issue which needs to be addressed.

Telecom licences of Sistema Shyam Teleservices (Sistema's JV in India with Shyam Group) were among the 122 cancelled by the Supreme Court in February this year.

Rogozin said the presence of Vladimir P Yevtushenkov, Chairman of Board of Directors of JSFC Sistema, in his delegation was evidence of the "interest" his country has in the issue.

"We feel that in this sensitive area, we must find....proper treatment to Russian economic entities participating in the local markets similar

Responding to Russian concern, Krishna said there is a judicial process on in the matter.

Referring to "some issues" which need to be addressed, Rogozin said "we must do everything possible to address these problems as soon as possible for mutual benefit" but did not get into the specifics of it.

The two sides also discussed the status of the third and fourth nuclear reactors for which the "techno-commercial" agreements were underway. "After the first two units (1000 mw each) of the project in Kudankulam, techo-commercial negotiations are underway for the third and fourth units, which are expected to be inked soon," the sources said.
© Copyright 2021 PTI. All rights reserved. Republication or redistribution of PTI content, including by framing or similar means, is expressly prohibited without the prior written consent.