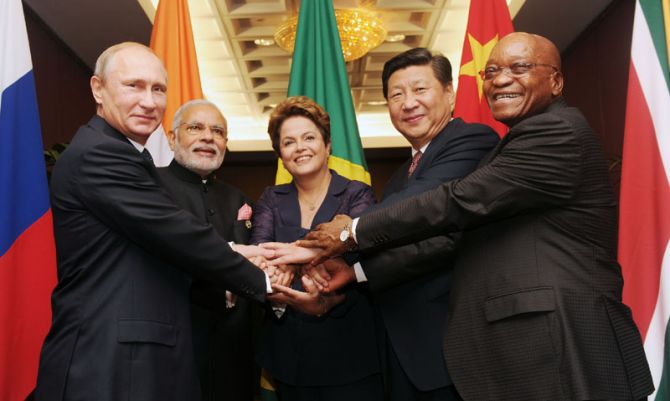 The G20 has cited India among other countries for launch of major investment initiatives and for having a sustainable growth.

A Brisbane Action plan released as part of the G20 communique also said that the state of the global economy calls for a comprehensive and coherent policy response that restores near-term demand, removes medium-term supply constraints and builds consumer and business confidence.

"While growth in some key emerging market economies is robust and is becoming more sustainable, including in China and India, it is slowing in some other countries," it said, adding that many low-income countries are performing well."

Railways Minister Suresh Prabhu, who accompanied Prime Minister Narendra Modi at the summit of the group of 20 industrialsied and emerging market economies, told reporters that India's expected growth is projected to be over six per cent in 2014-15.

In other countries, the G20 noted that growth has picked up some advanced economies, notably the US, the UK and Canada. However, the recovery is modest in Japan and in the Euro area and inflation is well below target.

The action plan said that the implementation of policies to comprehensively address both near-term and medium-term challenges could further strengthen the recovery by building confidence and increasing demand.

Noting that the state of the global economy calls for a comprehensive and coherent policy response that restores near-term demand, removes medium-term supply constraints and builds consumer and business confidence, the plan said that the grouping has developed comprehensive growth strategies that addresses these challenges.

G Sudhakar Nair in Brisbane
© Copyright 2021 PTI. All rights reserved. Republication or redistribution of PTI content, including by framing or similar means, is expressly prohibited without the prior written consent.