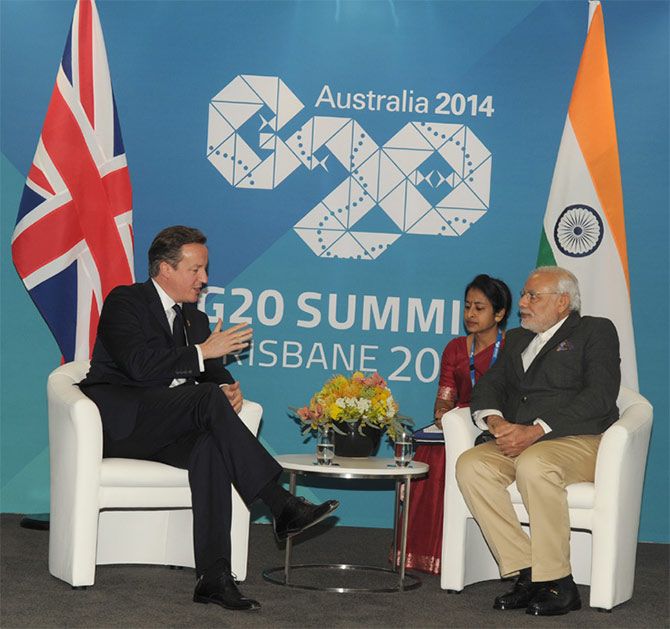 The B20 leaders, who met on the sidelines of the summit of leaders of the Group of 20 leading and developing economies in Brisbane, called on them to commit to a bold reform agenda and ambitious individual country growth strategies.

A statement from B20, a grouping of business leaders of G20 members, said the group's Chairman Richard Goyder would be asking the G20 of which India is a member to make commitments in five key policy areas –- finance, human capital, infrastructure, trade and transparency to drive growth and employment outcomes.

"Since the onset of the financial crisis, governments have tackled low growth with fiscal and monetary policy," Goyder said. "But this level of spending is clearly not sustainable and is not inspiring the commercial and consumer confidence needed to kickstart the global economy."

Welcoming the G20 finance ministers' decision earlier this year to set a growth target of two per cent above expectations over the next five years, the B20 group said sustainable growth will require business investment driven by more than just confidence.

"The enabling environment for business must be improved to stimulate investment, enhance productivity and increase economic activity and growth," it said.

Modi while sharing his concerns on "jobless growth" prospects felt that focusing on transforming the quality of life of people, not just on issues like the health of the financial markets, was necessary for creating employment-generating economic growth.

The Prime Minister had expressed this view when the G20 summit host and his Australian counterpart Tony Abbott had telephoned him ahead of the summit to know his views.

Abbott had invited Modi to share, in particular, his vision for accelerating global economic growth and employment generation, based on his personal experiences of reforms and growth at the state-level and his plans for India.

Abbott had also sought Modi's support for Australia's infrastructure initiatives in the G20. The OECD's latest Economic Outlook found that the global economy is still stuck in low gear but it is expected to accelerate gradually if countries implement growth supportive policies.

The report found that reforms to tax, trade, labour and product markets will benefit domestic investment and global trade, and support greater employment and consumption around the world.

The B20 said it has made 20 mutually reinforcing recommendations to the G20, which if implemented, would increase investment and global trade, and support greater employment and consumption around the world.

"We have laid a blueprint for business to work with governments to combat corruption and improve transparency, major barriers to growth, which will promote greater integrity in  commerce," the B20 statement said.

Robert Milliner, B20 Sherpa, said he expected progress to be made when the group chiefs meet with G20 leaders, particularly on the infrastructure agenda, but more work needed to be done on labour market reform and to stimulate trade.

"We are encouraged by proposals to establish a Global Infrastructure Hub. Our research shows that establishing a Hub would support an additional $2 trillion in infrastructure capacity, add $600 billion to global GDP and support 10 million additional jobs by 2030," Milliner said.

Milliner said productive infrastructure investment is the key to sustainable increases in economic growth because it creates permanent direct employment and enhances productivity for the commercial enterprises that use it.

G Sudhakar Nair in Brisbane
© Copyright 2021 PTI. All rights reserved. Republication or redistribution of PTI content, including by framing or similar means, is expressly prohibited without the prior written consent.