Thanks to the increased thrust on cow protection, the enforcement of the ban on cow slaughter and the relentless crusade by cow vigilantes, the agrarian ecosystem from Haryana to Uttar Pradesh has been irrevocably altered.

There's a huge spike in the number of stray cattle roaming the countryside, destroying crops.

Ten cows/bulls take barely an hour to eat and destroy a bigha of crop land. 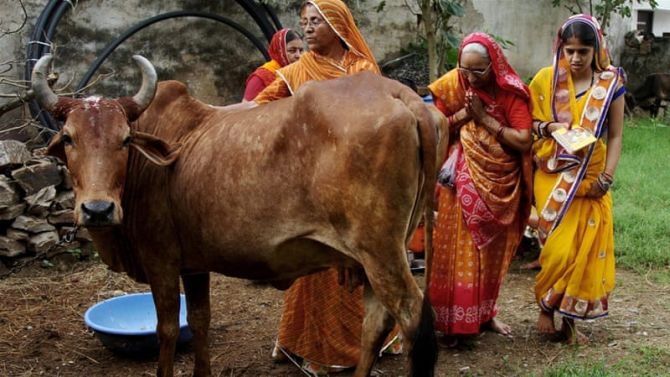 Scythe in hand, a young labourer in a village in Panipat, Haryana, chases stray cows away from the paddy field she’s working in.

“My employer has told me to hit, cut or maim any stray cow trying to ruin his crop,” she says.

Over 650 km away in Barabanki, Uttar Pradesh, Chandrashekhar Patel, a farmer, is installing a blade wire fence around his fields to ward off stray cows.

“It costs Rs 70,000 and is so deadly that it rips open the skin of any animal that brushes against it,” he says.

“But I have to do it before cows destroy my crops.”

About 100 cows arrive at the shelter every day.

The growth in stray cattle in India’s cow belt has resulted in a crisis of unprecedented proportions.

At last count, there were 5.2 million stray and abandoned bovines in the country.

Estimates suggest this number may have doubled by now.

Thanks to the increased thrust on cow protection, the enforcement of the ban on cow slaughter and the relentless crusade by cow vigilantes, the region’s agrarian ecosystem has been irrevocably altered.

A large part of the problem is due to India’s thriving dairy industry, growing at over 15 per cent every year.

Milch cows are bred in both the organised and ad hoc dairies across the country, but cash-strapped farmers can’t afford to keep non-milk producing male calves and bulls.

Traders won’t buy them as the ancillary leather and meat industries are no longer viable and gaushalas are filled to several times their capacity.

The result is a huge spike in the number of stray cattle roaming the countryside, destroying crops.

The interim budget has proposed an outlay of Rs 750 crore on bovine protection.

Ironically, though the government has saved countless bovine lives by banning cattle slaughter, it has been less than successful in ensuring the actual wellbeing of the animal many Hindus consider sacred.

A fate worse than death

“We recently conducted surgeries on five rescued cows and found their rumens clogged with plastic bags, syringes, and even blades,” says Anjali Gopalan, founder, All Creatures Great and Small, a sanctuary for old, sick, and abandoned animals in Faridabad.

The plastic in their system causes the cows to die painful deaths despite best of care.

Cows also die of injuries incurred in traffic accidents or beatings at the hands of farmers whose fields they stray into.

“We spend up to Rs 200,000 a month on medicines,” says one of the gaushala’s trustees, requesting anonymity.

“But mortality rates among stray cows are high.”

Their ambulance picks up dozens of injured animals each week.

Activists also say farmers do not care about the plight of these stray animals.

“Some time ago, we rescued a blind cow with a deep head wound crawling with maggots,” says Anurag Mishra, who runs a private gaushala in Lucknow.

“Locals reported it only when the cow, maddened with pain, became dangerously agitated.”

The state of stray and abandoned cattle is worse in rural areas.

“In Bundelkhand, stray cows starve to death in winter and die of thirst during droughts,” says Abhinav Srihan of Delhi-based Fauna Police.

From Mata to Menace

So how did the cow go from being revered as a divine mother to being reviled as a pest?

Farmers in the village of Nardahi estimate that they have lost about 50 bighas of crops to stray cows.

Ten cows/bulls take barely an hour to eat and destroy a bigha of crop land, they say.

Consequently, all through this winter, they were forced to patrol their fields at night.

“I missed going on patrol one night, and a herd of cows came and destroyed my entire wheat crop,” says Chandrashekhar Patel.

“Overnight, I had to replace the crop with mustard to recoup at least some of my losses.”

Most of these farmers who have landholdings of under two bighas cannot easily afford to spend this money.

Even so, it remains their best option.

They know that blade wire causes severe injuries to stray cattle, but protecting their crop takes precedence over animal welfare.

Many whisper that trucks still come at the dead of night to take stray cattle to illegal slaughterhouses. Most farmers turn a blind eye to it.

The Gaurakshak cuts a lonely figure

Thanks to the stray cow menace, gaurakshaks now get very little support from farmers.

“They had stuffed 16 heavily drugged animals into a truck and were driving through the Panipat-Hardwar highway,” he says.

“We thrashed them and turned them over to the police.”

The gaurakshak, however, gets no money for protecting cows.

And neither does he seem to get much love.

When a sect from Mathura came to Haidargarh to preach cow love some time ago, they were chased out of the village within minutes.

“We’re Hindu, the cow is our mother, but this daily depredation to our crops will kill us,” says Tej Narain, a farmer.

“The government needs to find a solution to the stray cow problem before it destroys our livelihoods,” he says.

“If not, they might find that the holy cow has eaten up their votes!”