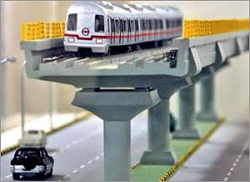 “They are pleased with the Kochi visit. We expect in-principal clearance for the loan as early as April.

"If all goes well, the loan can be processed by the end of December or latest by January 2014,” said Elias George, managing director, KMRL.

The metro project needs an external borrowing of about Rs 2,170 crore (Rs 21.7 billion).

The French agency is likely to offer Rs 1,050 crore loan with a tenure of 20 years.

It would come with a moratorium of nine years and 2 per cent interest.

The team had asked for additional data on environment impact and traffic details to ascertain sustainability of the project, a KMRL release stated.

The agency had a detailed discussion with KMRL managing director and other senior officials.

The project, which received final approval from the Centre in July last year, is estimated to cost Rs 5,180 crore (Rs 51.8 billion) and is scheduled to be completed by 2016.

Phase-I will have 22 stations and a system length of 26 km.

A 10-member Jica team had visited Kochi last November and their preliminary report is expected by this month-end.

The loans expected from AFD and Jica work out to about 42 per cent of the total project cost.

Both central and state governments will extend financial support through capital investment.

The state government also approved the tripartite agreement for the construction of the metro, involving the Centre, Kerala government and KMRL.

The estimate for land acquisition has now gone up to Rs 1,110 crore (Rs 11.1 billion) from the earlier Rs 672 crore (Rs 6.72 billion) with the increase in land area to be acquired on account of revisions in the alignment and parking space at stations.