Of the cash outgo, Rs 64,598 crore is for enhanced expenditure on fertiliser subsidy under Atmanirbhar Bharat Abhiyan 3.0 and Rs 20,466 crore for the capital outlay in defence services. 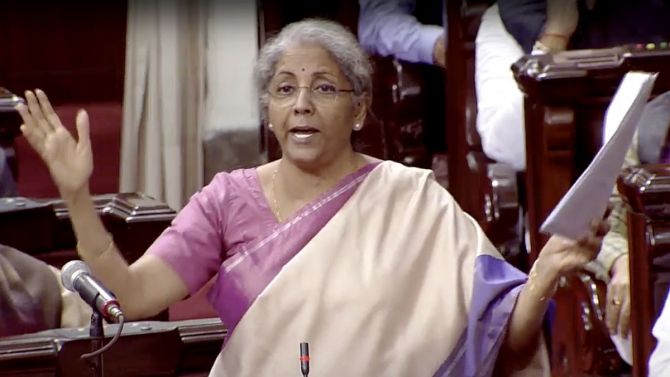 Union Finance Minister Nirmala Sitharaman on Thursday sought Parliament’s approval for an additional Rs 4.12 trillion, one of the highest, in the second supplementary demand for grants of the current fiscal year.

It is part of gross additional spending, estimated at Rs 6.28 trillion, after accounting for Rs 2.15 trillion of savings or reallocation from ministries with under-utilised funds.

However, the provision for this gross additional spending was made in the revised estimates of the Union Budget.

Of the cash outgo, Rs 64,598 crore is for enhanced expenditure on fertiliser subsidy under Atmanirbhar Bharat Abhiyan 3.0 and Rs 20,466 crore for the capital outlay in defence services.

There were only two demands for grants in this fiscal year instead of three, due the winter session of Parliament not taking place.

To maximise investment in roads and transport, an additional Rs 5,030 crore has been sought owing to investment in the National Highways Authority of India, Bharat Mala Pariyojna, etc.

Another Rs 4,970 crore has been sought for road development and a cash outgo of Rs 3,457 crore was made for the Mahatma Gandhi National Rural Employment Guarantee Act.

To augment health infrastructure, the government has sought Rs 1,497 crore for grants-in-aid under schemes including Pradhan Mantri Swasthya Suraksha Yojana.

After the Budget and before the fiscal year ends, the finance ministry moves a “Supplementary Demands for Grants” in Parliament.

Basically, it comprises proposals related to additional expenditure over and above what is prescribed in the previous Budget.

This additional expenditure is met through two means — net cash outgo or cash supplementary and savings of various ministries/departments or technical supplementary.

Cash supplements require the government to go for new means or better use of means.

“Approval of the Parliament is sought to authorise gross additional expenditure of Rs 6,28,379.99 crore.

"Of this, the proposals involving net cash outgo aggregate to Rs 4,12,653.48 crore and gross additional expenditure, matched by savings of the ministries/departments or by enhanced receipts/recoveries aggregates to Rs 2,15,725 crore.

"Besides, token provision of Rs 151 lakh is being sought, one lakh for each item of expenditure, for enabling re-appropriation of savings in cases involving new service,” said the second Demand for Grants, which includes 79 grants and two appropriations.

In the first batch of the current fiscal year, the government sought parliament’s nod for Rs 2.36 trillion of additional gross expenditure. Of that Rs 1.67 trillion was a net cash outgo.