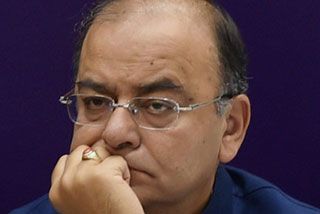 With a little over three months to go before 2014-15 ends, Finance Minister Arun Jaitley might have to lower government expenditure by as much as Rs 1 lakh crore — much more than previously anticipated — to meet the fiscal deficit target for the year.

The total spending cut required to restrict fiscal deficit for the financial year at 4.1 per cent of gross domestic product (GDP) could be Rs 1-1.20 lakh crore, Business Standard has learnt from multiple sources.

This is going to be the third straight year when the government will have to lower its expenditure, and second when the cut will have to be this high. The government had brought its spending to Rs 79,653 crore (Rs 796.53 billion) less from Budget projections in 2012-13, and Rs 1.02 lakh crore less in 2013-14.

A huge cut in expenditure is required since tax revenues are not forthcoming, the residual stake sale in Hindustan Zinc (HZL) and Balco is set to be scrapped and major subsidies are not likely to result in much saving this financial year despite the fall in global crude oil prices and the food security law not being in place in all states. The government was able to collect only 3.46 per cent more revenues from taxes (net of states’ share) till October in 2014-15, against  19.75 per cent growth projected in the Budget estimates in the entire year over the actual mop-up of 2013-14.

At least two sources have confirmed the government is unlikely to save much on the Rs 63,427-crore Budget estimate for petroleum subsidy, in spite of a decline in global crude oil prices, given that Rs 46,291 crore (Rs 462.91 billion) has already been spent in the April-October period.

“In the June quarter of next financial year, there might not be any big carry-forward pending subsidy payment, thanks to lower crude oil prices. But that will reflect on next year’s spending projections. A benefit is unlikely this year; the entire amount will likely be spent,” said an official.

There are also concerns over food and fertiliser subsidies, which need to be reined in. The April-October, combined subsidies on fuel, food and fertiliser reached 71 per cent of the full-year target of Rs 2.51 lakh crore. In absolute terms, the three items, which together account for about 95 per cent of all Central subsidies, stood at Rs 1.78 lakh crore, compared with Rs 1.73 lakh crore in the same period a year ago.

Additionally, according to sources, though the Central Board of Excise and Customs (CBEC) is expected to rake in about Rs 10,000 crore more from an increase in excise duty on petrol and diesel, that could be offset by a decline in factory-gate collections due to low industrial production, which in October contracted 4.2 per cent from a year ago.

Government officials did not elaborate on where the cuts might come from but they conceded there could be a need to look at Plan spending, to effect at least part of a possible cut, since most of the non-Plan spending was committed in salaries, pensions, defence spending, and operational costs. This could affect social schemes, as well as capital expenditure.

In fact, sluggish growth also makes it difficult for the government to go for huge cuts in capital expenditure which might put the government in a dilemma - whether to rein in fiscal deficit or spur sagging economic growth.

Last November, the Centre had introduced a fresh round of austerity measures, including bans on first-class travel, creation of new posts and holding meetings in five-star facilities. The aim for every department was to effect a mandatory 10 per cent reduction in Non-Plan expenditure - excluding interest payment, repayment of debt, capital spending for defence, salaries, pensions and grants to states.

“The departments have been told to also try and save on Plan spend allocations, though there is no fixed formula or target provided for that,” said a second government official.

Internal government estimates indicated a tax revenue shortfall of Rs 70,000-80,000 crore (Rs 700-800 billion) in the total budgeted estimate of Rs 9.77-lakh-crore direct and indirect tax collections (net of states share), officials said. Last year, the government collected Rs 8.16 lakh crore from  taxes. The revenue department has consistently had its financial year targets revised downwards since 2009-10. For instance, compared to Budget estimates of the respective years, the department's kitty had got narrower by Rs 29,194 crore (Rs 291.94 billion) in 2012-13, and by Rs 68,032 crore (Rs 680.32 billion) the next year.

The Centre's fiscal deficit for the April-October period totalled Rs 4.76 lakh crore, 89.6 per cent of the Rs 5.31-lakh-crore target for the entire financial year. This also was the highest in comparable periods since at least 1998-99.

In spite of tight fiscal space, Jaitley has promised Rs 11,000 crore (Rs 110 billlion) to states as part-payment for Central sales tax (CST) compensation. On its own, the figure might not be too big, but an official said the finance ministry would have to find room for the amount, given a tight fiscal situation. “I won't be surprised if some spending cuts are made to accommodate this amount for states,” the person said.

What adds to Jaitley's problems this year is the fact that the Centre's ambitious Rs 58,425-crore disinvestment programme is in doldrums, too, with a Rs 15,000-crore (Rs 150 billion) residual stake sale in Hindustan Zinc and Bharat Aluminum set to be scrapped. Among the companies for which it firmed disinvestment plans — Coal India, ONGC, NHPC, and SAIL — one (SAIL) has already happened, fetching about Rs 1,700 crore (Rs 17 billion).

Divestment in other companies part of this year's stake sale road map, such as Container Corporation, Hindustan Aeronautics and Rashtriya Ispat Nigam Ltd, might have to be postponed to later financial years.